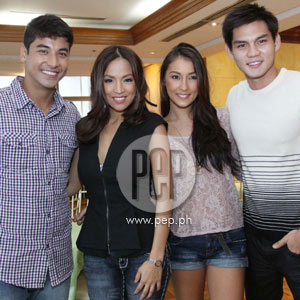 Who among the Final Four will be named the first Celebrity Sole Survivor? Will it be (from left) Akihiro Sato, Aubrey Miles, Solenn Heusaff or Ervic Vijandre?

In the November 25 episode of Survivor Philippines: Celebrity Showdown, the big twist of the season was revealed. Host Richard Gutierrez announced that the jury will vote for the last jury member, trimming down the Final Four to the Final Three castaways.


The jury members—composed of Moi Marcampo, Jon Hall, Aira Bermudez, Michelle Madrigal, Ahron Villena, and Elma Muros—voted off one of the Final Four. However, their votes will remain secret until the live finale that will air on GMA-7 by December 3, 2010.


On that day, the identity of the seventh jury member will be revealed and all of the jury members will have to vote for the person they think deserves to win the P3 million cash prize and the title of first Celebrity Sole Survivor.

"And as the finale—where the top 3 and eventually the first ever Celebrity Sole Survivor will be announced—draws near, Survivor Philippines: Celebrity Showdown will give viewers a glimpse of Camp Life Uncut and more in a series of specials leading to the big day.

"Last Friday's episode was a recap of the three-month ordeal and excitement that is Survivor Philippines: Celebrity Showdown. From the mock presscon at the hotel to the tribal council that, as the dust settled, left the Final Four.

"This Monday, get a peek of 'Camp Life Uncut,' featuring the funny, annoying and entertaining antics of the tribe members. Relive the moments when Mama Elma Muros seemed to come undone, the clashes: Doc Ferdz Recio vs Buhawi Meneses, Jon Hall vs Moi Marcampo, Jon vs Ahron Villena, Ahron vs Ian Batherson, and, of course, the epic Jon vs Michelle Madrigal. Also, re-discover Pretty Trisza's so-called 'gamol' ways and, perhaps, decide once and for all if Karen delos Reyes should pose for FHM.

"Tuesday is action-packed SURVIVOR day. Catch some of the toughest challenges and most awe-inspiring feats of the season: Aira Bermudez's and Elma's acrobatic stunts during the Ungguyan Challenge, the production numbers in That's Entertainment Challenge! and the nerve-wracking Itaas Ang Kamay Challenge with Akihiro, Solenn and Ervic.

"On Wednesday, get on the 'Road to Final Four' How did Akihiro, Aubrey, Ervic and Solenn reach the Final Four? Analyze the strategies, alliances and defining moves that helped them come even closer to the coveted P3 million peso prize (that comes tax free!). What else do they plan to do to become the first ever Sole Celebrity Survivor?

"And finally, a day before the much-awaited live finale, relive the most memorable showdowns and encounters on the tribal council with host Richard Gutierrez.

"Look back at the tension-filled ouster of Doc Ferdz; the nerve-wracking double elimination that saw Ian and Mico say goodbye to the game; Ervic's emotional plea; Jon's grand gesture of giving his immunity bracelet to his girlfriend Michelle; the blindside that took Aira out of the game; and the shocking Final Tribal Council.

"The live finale awaits. Who will outwit, outplay, outshine on primetime? Who will become the first ever Sole Celebrity Survivor?

"Catch the finale week of Survivor Philippines: Celebrity Showdown, after 24 Oras, on GMA-7."