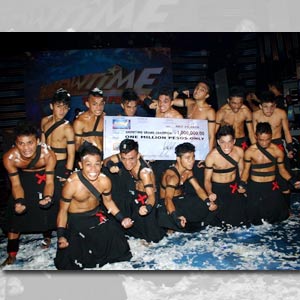 Who will follow in the footsteps of XB Gensan (shown above)? Find out in the grand finals of Showtime Season 2, which will air this Saturday, December 18.

"The whole country will stand still once again when the nation's most entertaining performers fight it out this Saturday (December 18) in the much-anticipated Showtime Season 2 Grand Finals on ABS-CBN.

"Viewers are also looking forward to the return of Season 2's guest judges including Ryan Bang, Jhong Hilario, Kaye Abad, and Karylle to help Vice Ganda with the grueling task of scoring the performances.

"Early this year, dance group XB Gensan gave a rousing number that drove the audience to applause and tears on the way to winning the show's P1 million prize.

"Meanwhile, Showtime will also put a twist to Filipinos' Christmas celebration with Christmas-themed episodes from Monday (December 20) to Saturday (December 25) featuring some of the biggest stars in the country.

"But first, catch the explosive and breath-taking Showtime Season 2 Grand Finals this Saturday (December 18) after Kapamilya Blockbusters on ABS-CBN."