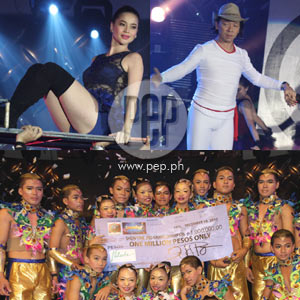 Anne Curtis was twirled around as she held on to a body board while Kim Atienza surprised everyone with a ballet-inspired number during the grand finals of Showtime Season 2. The Laoag City Gymnastics Group (bottom frame), received an average score of 9.86 from the judges, making them the second grand champion of ABS-CBN's talent search.

Ten grand finalists competed fiercely for the prize and glory in Showtime Season 2, ABS-CBN's talent search that has captured the hearts and minds of the "madlang people." The three-hour long episode aired on the Kapamilya Network yesterday, December 18.


The finalists hailed from provinces all over the country--from Zamboanga del Norte, South Cotabato in Mindanao to Tacloban City, Leyte in the Visayas and from Metro Manila.


The Laoag City Gymnastics Group, received an average score of 9.86 from the judges, making them the grand champion of Showtime Season 2. The group from Northern Luzon, which succeeded first season's champion XB Gensan, took home the coveted P1 million prize.

XB Gensan, Showtime's first grand champion, opened the show with a touching prayer. Their leader said, "Thank you Jesus for all the challenges...and the blessings..."


Anne Curtis ended the prayer, followed by a group hug from all the hosts: Vhong Navarro, Kim Atienza, Jugs Jugueta, and Teddy Corpus.

Afterwards, the Showtime hosts performed a vibrant group number including Jerry Lee Lewis' "Great Balls of Fire." The hosts then showcased their "sample" through their solo numbers. Vhong Navarro danced the cha-cha with a modern twist with the XB Gensan.


Anne Curtis wore a sexy blue sequined micro mini dress and thigh high black stiletto boots as she performed a sultry number. As she held on to a body board, Anne was twirled around like a baton by dancers.


Kuya Kim surprised everyone with his "ballet" act that was smoothly executed and accompanied by the "Song for Anna." Wearing an all-black Goth-inspired hip-hop outfit, Vice Ganda did krumping dance moves with XB GenSan to the delight of the audience.

KIDz@TRIK from Davao, Mindanao is the second group that showcased their "Krumping" and hip hop moves with so much power. The members, who had red spiky hair, executed numerous back flips. Balladeer Richard Poon felt the "flips were very, very excellent." Tetchie Agbayani was likewise impressed by the tumbling displayed by the group.

The comedian then turned serious as he expressed his strong dislike for the use of guns in their choice of sound effects. He emotionally narrated that his own father died as the result of a gunshot. "Batang-bata ako nang mawalan ako ng tatay. Nabaril ang taty ko at naulila ako. Kinailangan mag-abroad ang nanay ko at naulila ako ng pangalawang beses. Kaya sana kalimutan na natin ang baril at ang tunog nito."


As a result, the group KIDz@TRIK earned a score of 5 from Vice Ganda.

Another tough contender from Mindanao, particularly Molave, Zamboanga del Sur is 89.9 HOODZ. This group of energetic males had the guts to pull off a practical joke that had the judges, crew and the "madlang people" on their toes, worried sick for a moment and laughing the next.


During their production number, one of the dancers appeared to be injured, making everyone's heart skip a beat. However, it turned out that he was just joking and the group continued with their dance.

The MAMA'S BOYS was the fourth group in the lineup. Unlike their competitors, this Sta. Mesa, Manila-based group performed a "novelty" act. Wearing orange prison outfits, the Mama's boys danced while showing comedy skits. One member even shaved his own hair on the set. The audience guffawed at their unique act.

The fifth group, LAL-LO'S BLACKLIGHT PERFORMERS,from Lal-lo, Cagayan Valley grabbed the spotlight in a dramatic manner. "Believe" and "Dreams come true" are the underlying messages that the black light artists relayed to the audience as they beautifully interpreted the song "Thanks to You" through varied symbols.


"Pinapahirapan ninyo kaming mga judges...Ang ganda ng energy...Salamat sa magandang sayaw na binigay ninyo..." was actor-dancer Danilo Barrios' remark about the group. Vice Ganda pointed out that the group's dance is similar to the other performances. "Pare-pareho kayo ng material," said the comedian, prompting him to give a score of 5.

The seventh contender, XTREME 24/7,kept the adrenalin rush flowin'. Dressed in sporty yet colorful outfits, this group from Zamboanga interestingly performed various dance acts using a unique medley of tunes, including a Christmas song. One member even rapped "live" while the rest danced with vigor. The back side of their outfits outlined a luminous "stick man" figure. They ended their act with a bang by "throwing" away several t-shirts to the audience members.

An extraordinary group from Laoag, Ilokos Norte showed the "madlang people" and the judges their world-class performance. LAOAG CITY GYMNASTICS GROUP gave it their best shot as they performed lithely and flawlessly. It was such an awe-spiring performance that drove the audience to give them a standing ovation. Even the show's jurors were visibly impressed.

ZERO GRAVITY from Tacloban City, Leyte was the ninth finalist in the competition. The only Visayan contender, the group members wore colorful graffiti shirts and caps as they gave a high-powered performance showcasing their unique comedic krumping, hip-hop dance moves.

The final group to take center stage was this week's wild card winner called GROUND ZERO from Koronadal, South Cotabato who did a contemporary dance number. Like a breath of fresh air, they gracefully interpreted the song Gary Valenciano's "Warrior is a Child" which was sung live.


As for Vice Ganda, the resident judge remarked, "Nakakaaliw ang costume...Napakaganda ng boses mo, masarap pakinggan..." He gave them a score of 6.

After more than three hours of intense competition, Vhong Navarro and Anne Curtis proudly announced that the second grand champion is Laoag City Gymnastics Center. The members jumped with joy upon learning that they would get the P1 million prize of the competition.

Viewers can look forward to the Showtime Christmas special with hosts Vhong Navarro, Anne Curtis, Kuya Kim Atienza, Jugs of Itchyworms, Teddy of Rocksteddy and resident judge Vice Ganda from Monday (December 20) to Friday (December 24) featuring some of the biggest stars in the country.