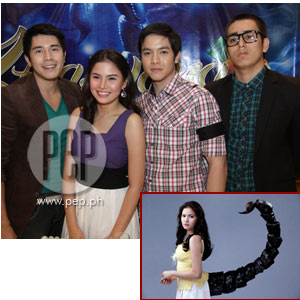 GMA-7 is bringing its tried-and-tested primetime formula into the afternoon fold.

Director Mac Alejandre, however, clarifies that Alakdana is still very much a drama series and not an outright fantasy offering in the mold of past evening hits like Encantadia or Atlantika.

"Ngayon, it is being cascaded into the non-primetime block, and it's so nice to see the effect of this equity on an audience na sila din naman ang audience ng primetime—how will they be able to accept it on an earlier block."

Giving Louise a lead role even without an audition shows the high confidence that network executives have for the pretty actress.

Serving as one of Louise's leading men is another newcomer, commercial model Alden Richards, who unlike the lead star had to go through an audition together with other Kapuso talents.

The two other leading men are Paulo Avelino and Ritchie Paul Gutierrez.

Direk Mac takes pride in molding new talents. He likes the challenge of guiding "diamonds in the rough" and being able to gradually bring out the best in them until they are confident enough to move forward to other projects.

Louise confessed feeling intimidated the first time she saw the director in person.

CURSED SINCE BIRTH. Alakdana tells the story of Vergel (Matthew Mendoza), an entrepreneur who falls in love with his family's helper named Teresa (Jean Garcia).

The lovers pursue their clandestine romance until the arrival of Vergel's ex-girlfriend Zoila (Jobelle Salvador).

Determined to win Vergel back, Zoila solicits the help of an ermitanyo (Junee Gamboa), who reveals the magical powers of a golden scorpion.

Armed with the golden scorpion, Zoila instructs it to sting Vergel and erase his current memory. She also orders the deadly arachnid to put a curse on the pregnant Teresa.

Vergel cancels his wedding to Teresa to be reunited with his former flame. A grief-stricken Teresa discovers that she is pregnant with Vergel's son but vows to take good care of the child.

Teresa gives birth to her daughter Adana (Louise delos Reyes). However, the curse inflicted by Zoila manifests in Adana in the form of a scorpion tail.

Adana grows up to be a compassionate and God-fearing child. She is frequently mocked by her playmates who make fun of her preference for long skirts.

Fortunately for Adana, her good friend Joma (Alden Richards) is always ready to defend and comfort her from the jeers she often receives from others.

A rape attempt on Teresa one night unleashes Adana's scorpion tail in an attempt to kill the assailant. The attacker Mando witnesses first hand the odd feature of Adana and immediately spreads the word around town.

Teresa and Adana soon find themselves running for their lives. How will this crisis change the fortune of mother and daughter? Will Adana find out the identity of her real father and the woman responsible for the curse? Will Adana still find someone who is willing to love her for who she is? Who among Billy (Paulo Avelino), Gabriel (Ritchie Paul Gutierrez), and Joma will be able snatch Adana's pure heart?

Viewers residing in the United States, Canada and Asia Pacific can watch this new series starting on January 26 on GMA Pinoy TV.