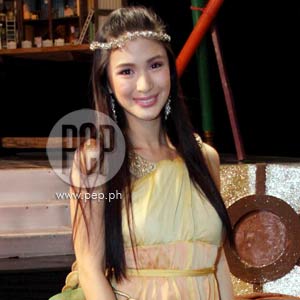 According to Nielsen TV Audience Measurement, GMA-7 had 21 entries out of the top 30 programs in Mega Manila this January. Dwarfina (starring Heart Evangelista) remains strong at the top spot since it debuted last January 10 with a people rating of 13.4 percent.

"Based on people data covering the month of January (January 23 to 31 based on overnight ratings), GMA posted the highest channel rating at seven points among free-to-air TV channels in Mega Manila, 2.3 points away from ABS-CBN's 4.7; and 3.4 points up from TV5's 3.6.

"Beginning January 10, as the Kapuso Network started launching its new programs for the year, Mega Manila as well as nationwide ratings further improved. For the period of January 10 to 31, GMA overtook closest rival ABS-CBN in national channel rating with 6.6 points, up by 0.1 from ABS-CBN's 6.5; and 3.4 points higher than TV5's 3.2 points.

"Mega Manila comprises 58 percent of total urban television households nationwide and has expanded coverage since January 1 to include Batangas and Laguna.

"For the whole month of January, GMA-7 led ABS-CBN with 6.8 points in channel rating, up by 1.8 from ABS-CBN's five points; and by 3.3 from TV5's 3.5 in another key area—Urban Luzon—which made up 77 percent of television households nationwide. In National Urban Philippines, GMA-7's rival station goes on a downtrend as the Kapuso Network registered 6.4 rating points, away from ABS-CBN's 6.5 by only 0.1 point.

"GMA-7 had 21 entries out of the top 30 programs in Mega Manila this January. Top-rater Dwarfina remains strong at the top spot since it debuted last January 10 with a people rating of 13.4 percent leaving behind its ABS-CBN counterpart Noah at the 24th slot with only 9.1 percent.

"The Aljur Abrenica-starrer Machete gained the number three slot with 11.8 percent toppling ABS-CBN counterpart Mara Clara, which fell to the 9th place in January with 11 percent.

"Primetime news program 24 Oras with 11.7 percent remains the choice of viewers earning 4th place on the list leaving TV Patrol at the lower part of the list in number 24 to tie with the another ABS-CBN program, Noah, with a 9.1 rating.

"The Nielsen TV Audience Measurement used by GMA-7 is used by 21 companies including two other local TV networks, namely, TV5 and Solar Entertainment; Faulkner Media; CBN Asia; 13 advertising agencies and three regional clients. On the other hand, ABS-CBN is the only local network reportedly subscribing to Kantar Media, formerly known as TNS.