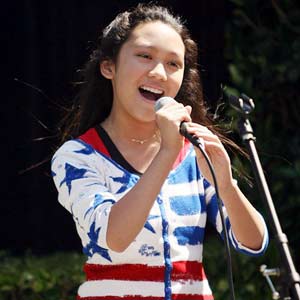 If Thia Megia passes the Hollywood round, she and the other IDOL hopefuls will be able to perform on the Cirque du Soleil stage.

"Fifty golden tickets--the key to getting to the Hollywood round--were given away in Austin. Among the most memorable IDOL hopefuls were John Wayne Shultz and Casey Abrams. Standouts in the Los Angeles auditions include the fabulous Gutierrez brothers--Mark and Aaron--who sang a Glee-like version of "Lean on Me."

"This week, IDOL goes to San Francisco for auditions. The following day, the Hollywood round begins. For the much-awaited Hollywood round, Fil-Am Thia Megia, returns to battle it out with her fellow audition standouts.

"Only 15 years old, Thia wowed judges and audiences around the world with one of the best performances during the Milwaukee auditions. She sang her version of Adele's "Chasing Pavement" and impressed judges Steven Tyler, Jennifer Lopez and Randy Jackson with her voice, singing chops and confidence.

"Thia faces tough competition. Among them: Scott McCreery, the 16-year-old country crooner with the deep voice, Molly DeWolfe Swensen, the Harvard grad who sang a smokin' version of "(Sittin' On) The Dock Of The Bay," Jerome Bell, who sang "Let's Get It On," Chris Medina who had a heartbreaking story about his girlfriend suffering from brain injury after an accident, Rob Bolin and Chelsea Oaks, former sweethearts who both got one golden ticket each, 22-year-old Adrienne Beasley who gave a moving version of Lady Antebellum's "American Honey," and the standouts of the L.A. and Austin auditions.

"The hopefuls who survive the Hollywood round go on to the next round, where, for the first time ever on IDOL, contestants will get to perform in Las Vegas, on the Cirque du Soleil LOVE stage no less.

"Who will survive the Hollywood round? Catch Fil-Am Thia Megia and the other IDOL talented hopefuls only in American Idol, the biggest talent show in the world.

"The best is yet to come. American Idol airs Thursdays and Fridays, 6 pm (with same day replays at 8pm) and 4:30pm Saturdays and Sundays only on Q Channel 11."