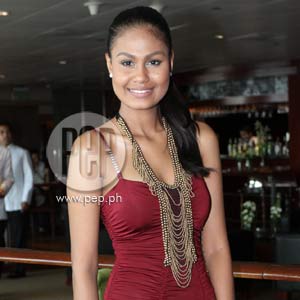 Miss Universe 2010 4th runner up Venus Raj is one of the new additions to ABS-CBN's morning show Umagang Kay Ganda.

"It's only been days since Miss Universe 2010 4th runner up Venus Raj started hosting ABS-CBN's morning show Umagang Kay Ganda but it seems that the beauty queen has already gotten the hang of her new job.

"I was so excited during my first day that I had to sleep early so that I would also wake up early. I'm used to it now. I sleep around 8 pm or 9 pm and wake up at around 3 am," said Venus.

"Venus is tasked to deliver daily showbiz news in the said morning show and just recently she already started going to barangays for the segment "Barangay Bida" where they will feature model communities.

"We will show why a certain barangay is considered a 'bida' be it in relation to the environment or the way they run things in their community. We will get barangays that have made a mark or achieved something in order to inspire other barangays," Venus explained.

"Meanwhile, new host Iya Villania is also as excited as Venus especially after learning that she will be hosting segments such as "Youth Tube," where the talked videos online will be showcased.

"That's why is easier for me to adjust because I can just be myself. I am personally into online videos, gadgets, and technology so I feel comfortable with the segments given to me. It's also a plus that I am working with people who I really look up to like Ms. Donita Rose who served as my inspiration why I pursued being a VJ," shared Iya.

"The sexy half-Aussie host-actress also added that she didn't think twice when hosting UKG was offered to her.

"I know that I will learn a lot from this show, being updated with the news and all. Besides, I am a morning person so waking up very early wouldn't be a problem for me so I gave it a go," she said.

"Aside from hosting Studio 23's Us Girls, and serving as a VJ for music channel MYX, Iya was also seen weeknights in Martha Cecilia's Kristine.

"If Iya can juggle both hosting and acting, Venus is also willing to venture into the latter. The Bicolana beauty earlier said she wants to be paired with Coco Martin and the ultimate heartthrob Piolo Pascual.

"Even though Piolo already admitted that he and KC Concepcion are together, Venus still admires the actor.

"I am happy for them and my admiration for Piolo will of course continue. It will not fade just because he already has a girlfriend. Besides, my crush on him wouldn't reach the point that I would actually want to be married to him (laughs)," she cleared.

"If ever Coco guests on UKG, is Venus ready for him? "Of course! I am excited to meet Coco," she said giggling.

"UKG is definitely bigger and better this time around with new segments you will surely watch out for every morning.

"Donita Rose, on the other hand, will teach young moms practical art works and crafts they can do right at their very homes in "Do It Youself."