GMA-7 gets ahead of rival networks, based on data from Nielsen 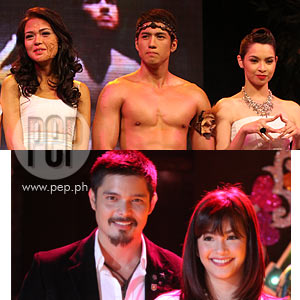 "GMA Network, Inc. (GMA) bested all other free-to-air television channels, not only in its bailiwick Mega Manila, but across National Urban Philippines, according to data from the more widely recognized industry ratings supplier Nielsen TV Audience Measurement.

"Based on household data in National Urban Philippines covering the period January 1 to February 13, 2011 (February 6 to 13 based on overnight data), GMA delivered the most watched lineup of programming as it registered 33.2 share points, 1.4 points ahead of ABS-CBN's 31.8 share points; and 18.3 points up from the TV5's 14.9.

"For the same period in Total Urban Luzon, which make up 77 percent of total television households nationwide, GMA is comfortably positioned at the top spot as it remains the channel of choice. The Kapuso Network posted a huge 9.8-point lead with 36.5 points compared to ABS-CBN's 26.7 points; and an imposing 19.6-point lead from TV5's 16.9.

"GMA launched several programs in January which contributed to the superior ratings of the Network. From January to February 11, the program launches which scored high share points in their respective timeslots in National Urban Television Audience Measurement (NUTAM) include Machete starring Aljur Abrenica with 25.1 points; I Heart You Pare topbilled by Regine Velasquez and Dingdong Dantes which scored 29.7 points; Dwarfina with Heart Evangelista and Dennis Trillo scored 27.3 points; and the afternoon hit Alakdana starring newest tween loveteam of Louise delos Reyes and Alden Richards with 40.3 share points.

"More programs are expected to sustain the high ratings of the Kapuso Network as these are launched this month. Among them are Nita Negrita starring Tween Royalties Barbie Forteza and Joshua Dionisio; Magic Palayok which brings back to the boob tube real and reel life sweethearts Carla Abellana and Geoff Eigenmann and Moral starring Nadine Samonte.

"The Nielsen TV Audience Measurement used by GMA is used by 21 companies including two other local TV networks, namely, TV5 and Solar Entertainment; Faulkner Media; CBN Asia; 13 advertising agencies and three regional clients. On the other hand, ABS-CBN is the only local network reportedly subscribing to Kantar Media, formerly known as TNS.