Be updated about sports through Gameday with Boom Gonzales 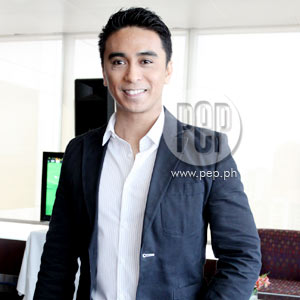 "There's so much going on [about sports]... A 30-minute [show] actually, alam niyo naman, kulang pa nga iyon. But the good thing about it is that it's a 30-minute [sports newscast] everyday," says Boom Gonzales about the newest sports news cast on Balls channel called Gameday .

Sports news used to have a separate segment in daily news programs. However, they slowly lost their prominence in newscasts over the past few years. Now, updates about sports are included in the news only when a local or international athlete marks a big achievement or there's a major event in the world of sports.

For this reason, cable channel Balls (Skycable 34) aims to bring back the daily sportscast through its newest program called Gameday. This flagship sports newscast had its pilot episode last January 24, 2011.

With sportscaster-radio jock Boom Gonzales as its host, Gameday will offer viewers the freshest sports news and provide local and international updates every day.

Aside from being a sports channel, Boom says it's just fitting that they launch such program in order to fulfill a need.

At the press conference of Gameday earlier today, February 15, Boom explains: "There's so much going on and we're not only talking about this year. I'm sure you guys know that there's so much going on in the world of sports locally and internationally, that a two or three-minute segment of a newscast is just not enough.

"People in production, our writers, and producers who are also very passionate about sports, they feel a little bad when their story is taken out or hindi nasasama. Some people might think na, you know, if there are enough stories around even just locally to sustain something like that, I think all of us agreed that there's a lot.

"A 30-minute actually, alam niyo naman, kulang pa nga iyon. But the good thing about it is that it's a 30-minute [sports newscast] everyday."

Right now, the program gives straight sports news and some features. But Boom says they have a lot of plans for the show.

"We're ever evolving, bata pa 'yong show but we have a a lot of plans for it. Right now, we're doing the straight newscast but we'll also be doing a lot of sports features, a lot of segments have already thought of and we're going to produce.

"We're also somehow also going to tackle a few issues and maybe a little bit of investigative. And we have a few surprises for the show. We're just trying to get it rolling right now just to establish the fact that there is a 30-minute sportscast every night."

From tennis, to golf, to football, to UFC, and of course, basketball, Gameday will try to cover everything for its viewers. "We're not only going to feature mainstream sports," Boom assures.

GETTING RECOGNIZED. Meanwhile, Balls station head Jojo Neri-Estacio is pleased to say that the sports channel is gaining more and more viewers.

"The channel launched November 2007 so it's about time we do big events to be able to move into doing the local production. As you know, Balls is a cable channel and we carry mostly foreign sports, except of course the UAAP and the NCAA.

"With the following that we got after the World Cup, after George St. Pierre's visit to the Philippines, the branding of the channel has been more known. People already know what it is. Unlike before, you know, hindi masyadong naririnig even if we had major events since the launch of the channel."

She also notes that this is one of the reasons they created Gameday.

"It's about time that we do our own sports show, our sports news show," she says. "For me, it's what the sports channel should be about, events and news all around sports. Even if you don't show the event, you'll have to be able to show some updates of what's happening all over."