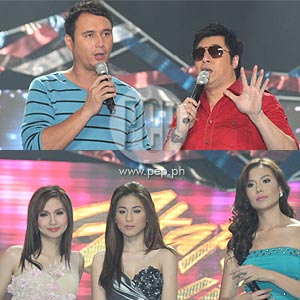 Since Willie Revillame's departure from ABS-CBN, the Kapamilya network has been trying out different formulas to make its noontime slot more competitive.

In July 2010, Robin Padilla and Kris Aquino were tapped to lead Wowowee's replacement titled Pilipinas Win na Win, but the arrangement didn't win them the top rating despite its star-power casting.

Adopting similar strategy when the now-defunct APO Hiking Society was given their own show 'Sang Linggo nAPO Sila, ABS-CBN then tapped four veteran singers collectively called The Hitmakers. Rico J. Puno, Nonoy Zuñiga, Marco Sison and Rey Valera were on the air for three months before the show bid farewell in December 31, 2010.

The network then moved its popular talent program, Showtime, but the show was not enough to compete with the longest-running noontime show in the country, Eat Bulaga!

It did much better nationwide according to data culled by Kantar Media-TNS. Happy Yipee Yehey got 14 % while Eat Bulaga registered 19.4 %.


REUNIONS. It was a welcome sight to see John Estrada and Randy Santiago together once again. Unfortunately, the pair looked like a tandem with a crutch without Willie Revillame.

After the show made its final curtain call, it was Willie who made a successful comeback via Wowowee, which was his brainchild. The show became a worthy rival to its competitor in GMA-7 due to the show's pro-poor slant, balikbayan-friendly ambiance, and Willie's trademark unpredictability.

Randy was previously part of GMA-7's Lunch Date while John was one of the hosts of TV5's Sunday variety show P.O.5 (Party on Five).

As a pair, John and Randy should be able to give the viewers a more compelling reason to choose them over TVJ (Tito, Vic and Joey). Unfortunately, this is easier said than done.

We will tend to think of Willie when we see John and Randy because the two have been greatly associated with the controversial, loquacious host. It didn't help that Willie underscored this in his tirades. I think ABS-CBN needs to move on regarding their past with Willie. Casting his former co-hosts in a show isn't making a step forward.

On the other hand, the reunion between previously estranged friends, Mariel Rodriguez and Toni Gonzaga was a delight to see. They both show that they have placed the past behind and their confidence in hosting makes up for whatever the show lacks.

FAMILIAR SEGMENTS. If you watch the actual program, Happy Yipee Yehey! is a great departure from Wowowee. Gone are the big prizes and games. Instead, we see segments that combine simple studio games, challenges for contestants outside the studio, segment contests like beauty pageants and stand-up comedy skits. If this formula sounds familiar to you, it is because this is the same formula used by GMA-7's noontime show, Eat Bulaga!


Happy Yipee Yehey! has a pageant called "My Girl." Female contestants compete against each other by showcasing their different talents, which is not that different from the "Calendar Girl" segment of MTB.

Another segment called "Lunch-A-Funny-Taym" will remind viewers of Magandang Tanghali Bayan's "Wansa Funny Taym." The skit aired on February 14 was titled "Mariah Claire," which is a spoof of Mara Clara. Bentong portrayed Mara/Mariah while Bianca Manalo portrayed Clara/Claire. Even casting Bentong and Jobert Austria seems to be the answer to Eat Bulaga's comedy pair, Jose Manalo and Wally Bayola.

While having similar program concepts is normal in local TV, I have always believed that you should offer viewers a better version. This is not the case with Happy Yipee Yehey! The games need more flavor. The flow should be more dynamic and exciting. The comedy skit could veer away from too much slapstick and overacting.

BEST BETS. I could not help but wish that ABS-CBN stuck to their core competency and that is, game shows. The Kapamilya network has been successful in coming out with shows that give out big bucks.

They would have been more successful if they thought of a completely new game show that is out-of-the-box. All they really need is a great host or combination of hosts to carry the show. With their stable of stars, they could have come up with a better combination.

But we have to remember that hosting is just one component of the show's formula. If they have exciting segments then the show will have a better reception from the audience. But as it is, the show's direction is not yet clear.

Case in point: Wowowee was originally conceptualized to bridge the gap between the masa and the affluent, the local Pinoys and the TFC subscribers. It started out as an experiment, which was noticed by the people.

If Happy Yipee Yehey! hopes to achieve noontime dominance, it would have to make changes quickly. Start with the content of the show and beef up the segments so that they look like better versions of their rival programs.

Give out the big bucks like they used to in games that will excite audiences and entice them to join.

Lastly, it should develop its own brand equity as they fulfill their mission of making noontime viewing fun.

Maybe then, the ratings would begin to improve and ABS-CBN might have another Wowowee in their hands.