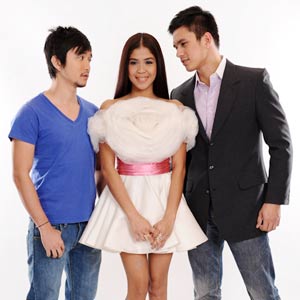 Precious Hearts Romances presents Mana Po will feature a love triangle composed of (L-R) Jason Francisco, Melai Cantiveros and Tom Rodriguez. Melai portrays a rich girl attempting to steal Jason's heart while Tom is cast as the childhood friend of Melai who is in love with her.

Since Melai Cantiveros is juggling different projects all at the same time, she sometimes forgets to assume her character's identity when she goes to the set of Precious Hearts Romances presents Mana Po.

The comedienne-actress brings life to a rich girl who suddenly finds herself fighting for her inheritance that comes from a lucky lottery ticket worth P5 million.

Jason Francisco admitted that they get reprimanded by the director for lapses in their acting. Melai's real-life boyfriend is cast as Milo, the heir who is supposed to receive the inheritance (mana).

Fortunately, they have supportive cast members who help them improve their craft. Megan Young, who is cast as a friend of Melai, actually helps the comedienne pronounce some of the English words. The director also makes it a point to remind Jason not to use his Batangueño accent since his character, Milo, is not from the province of Batangas.

Fellow PBB alumni Tom Rodriguez, Johan Santos, and Bea Saw will also join Melai and Jason in this TV show. Tom plays the childhood friend of Brandi who is love with her. Meanwhile, Johan is cast as the brother of Jason's character.

Completing the cast of Mana Po are RR Enriquez and politician-actor Alex Castro.

SYNOPSIS. How far will you go to get back something you think is rightfully yours? What will you do when your family's riches are inherited by someone you don't even know?

Brandi Dela Paz (Melai) has made it her mission to reclaim the inheritance that is supposed to be hers. She will have to make the heir Milosebio "Milo" Kiping (Jason) fall in love with her.

Before her father Vino (John Arcilla) died, he decided to correct his mistakes by giving everything that he owned to the son of his best friend Jack (Buboy Garovillo), whom he betrayed from way back when he kept and claimed the winnings from a sweepstakes ticket. Vino's family lived a luxurious life, enjoying a fortune that wasn't rightfully theirs. And so, before he died he made sure to give back to Jack what he stole.

As expected, Brandi does not like her father's revelations. She's determined to fight for her right to the money and the family's company.

Will her tricky and deceitful plan succeed? Will she hit the jackpot and reclaim the fortune? Or will she give it all up and instead choose Milo's heart as a consolation prize?