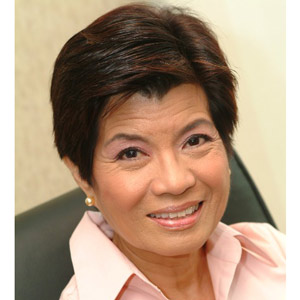 ANC will bring together the known faces and unsung heroes of People Power in the forum ANC Presents: EDSA 1986, to be anchored by Cheche Lazaro, live from the ABS-CBN studios on February 25 at 6:30 p.m.

"As the nation marks the silver anniversary of the historic 1986 EDSA People Power Revolution, ANC, the ABS-CBN News Channel kicks off its 15th year with a week-long special on the bloodless revolt.

"From February 21 to 25, the country's first 24/7 all-news channel will air special episodes of Talkback with Tina Palma, Strictly Politics, and New York Festival finalist Storyline on the different faces of EDSA, and will culminate with the live coverage of the 25th anniversary celebration on February 25.

"ANC will also bring together the known faces and unsung heroes of People Power in the forum ANC Presents: EDSA 1986, to be anchored by Cheche Lazaro, live from the ABS-CBN studios at 6:30 p.m.

"Cheche Lazaro will lead the panel that will retrace the events leading to the People Power with memorabilia, photos, and footage, and analyse where the Philippines stands now since the restoration of democracy.

"Well-regarded for its round-the-clock news and world-class coverage and features, ANC has become a byword among the movers and shakers in society, who have turned to the channel for both news and analysis on local and international issues.

"ABS-CBN took a big risk 15 years ago by launching a cable news channel when television was focused on churning entertainment programs. And with the passion and brilliance of ANC's journalists, it developed to become a chronicler of Philippine history, in the same way CNN is to the US or BBC is to the UK. Like the pioneer that it has always been, ANC will continue to stand for excellent journalism and continue being a frontrunner among local news channels," said ANC Managing Director and ABS-CBN Head for News and Current Affairs, Ging Reyes.

"Since 21 May 1996, ANC has not only been home to the country's top broadcast journalists, which included broadcasting greats like Tina Monzon-Palma, Angelo Castro Junior, Cheche Lazaro, and the late Frank Evangelista, but also a bastion of journalistic integrity and excellence that spans four Philippine presidents.

"The very first channel fully dedicated to news and current affairs, ANC has been the main source of unbridled news coverage of Filipinos all over the world. Viewers are given a front row seat in the most important hearings and events, and have access to breaking news whatever time of the day.

"ANC is also one of the pioneers of citizen journalism in the country by incorporating the use of social media in its programs. In fact, ANC is one of the country's most followed news organizations on Twitter and Facebook. The channel also figured heavily in preparing voters for the 2010 election by organizing presidential leadership forums and a series of debates.

"ANC will also bring back its highly-regarded short film project amBisyon with Kinse, 15 short films about human rights and hope, directed by the likes of Carlitos Siguion-Reyna, Erik Matti, and Raymond Red. Kinse will have a theatrical premiere this April and will air on ANC in May.

"Viewers and political observers should also watch out for ANC Presents: The Nation Up Close, a special one-hour weekly talk show (Thursdays 7:00 p.m.) that offers an incisive assessment of the hottest national issues.

"Stay tuned to the year-long 15th anniversary celebration of the 2010 Rotary Club of Manila Journalism Awards TV News Station of the Year, ANC, the ABS-CBN News Channel on SkyCable channel 27."