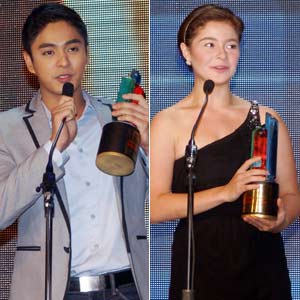 "ABS-CBN Corporation once again dominated this year's USTv Students Choice Awards and bagged a total of 15 recognitions, making it the most-awarded TV station and the true network of choice of most students at the University of Santo Tomas (UST).

"As expected, Kapamilya star Coco Martin didn't fail to please the crowd as he generated the loudest screams and cheers when he accepted the Student's Choice of Actor in a Daily Local Soap Opera award for his portrayal in the hit primetime series "Kung Tayo'y Magkakalayo."

"Angelica Panganiban, on the other hand, was named Student's Choice of Actress in a Daily Local Soap Opera for her unforgettable and talked about performance as "Rubi." Despite her absence during the awards proper, Angelica Panganiban managed to send her words of gratitude to the Thomasian community via a text message read by ABS-CBN AdProm Head Biboy Arboleda, who accepted the award on her behalf.

"Other entertainment show recognized that night were ASAP for the Students Choice of Variety Show category and He's Beautiful for the Foreign Soap Opera category.

"In the news and current affairs categories, ABS-CBN was able to bag the Students Choice of Public Service Program for "Salamat Dok" and Educational Program for "Matanglawin," where host Kim Atienza accepted the award.

"Star Records also took home an award in the Students Choice of Local Music Video category for Juris' "Di Lang Ikaw." Juris personally accepted the said award, which is the first ever recognition she received as a solo artist.

"Among the performers that night were Pilipinas Got Talent grand finalist Alakim and Showtime's first grand winner XB Gensan.

"ABS-CBN is indeed the network preferred by the youth evident with the recognitions given by various student-award giving bodies. Recently, ABS-CBN also ruled the Gandingan 2011: The 5th UPLB Isko't Iska's Broadcast Choice Awards where it took home 18 awards, including Most Development-Oriented TV Station.

"The USTv Student's Choice Awards is an award giving body spearheaded by the Office of the Secretary General of the University of Santo Tomas, which currently celebrates its 400th. Currently on its 7th year, it aims to give recognition to programs and personalities that promote Thomasian values and in harmony with the Catholic teachings."