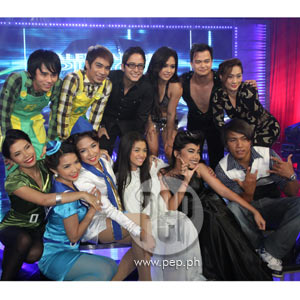 Talentadong Pinoy's two-day Battle of the Champions will air live on TV5 on March 12 and 13. Eight Hall of Famers and one wildcard grand finalist will showcase their talents at the Ynares Center for the coveted title of the Philippines' Ultimate Talentado 2011 and P1 million cash prize. Talentadong Pinoy is hosted by Ryan Agoncillo (third from left, standing).

The second season of Talentadong Pinoy's battle of the champions reaches fever pitch as eight equally talented Hall of Famers and one wild card finalist are poised to set the stage ablaze with a spectacular showdown.


Talentadong Pinoy's Battle of the Champions will air live from the Ynares Center, Antipolo City on March 12 and 13, on TV5.


Ryan reveals that for its next season, there are plans to search for talented acts in other Asian countries.

On March 12-13, viewers will get to see the performances of the eight Hall of Famers namely: Joseph the Artist, Beat box Gor, The Believers, New Born Divas, Sfashiva, Zion Show, Fire Attraction and RR Friends.

A deserving Wild Card contestant selected from a series of wild card episodes will be announced on March 6 and will be of equal footing with the Hall of Famers.

Up for grabs is the coveted title of the Philippines' Ultimate Talentado 2011, P1 million cash prize, and the lone victor will be one of the country's representatives to the World Championship of Performing Arts (WCOPA) in the United States.

MEET THE CHAMPIONS. Two Hall of Famers, specifically Fire Attraction and Beat box Gor did not attend the press conference held at the Sky Dome, SM North EDSA (were the show is usually taped). Each Hall of Famer got the opportunity to wow the entertainment and lifestyle writers and editors present during the event.

Anna Marie Garbo, also known as Sfashiva, displayed her talent in pole dancing. According to her, "Ever since I was in high school, I have been dancing and dancing has always been my passion. My parents were not supportive to what I am doing so ang ginawa ko, di muna ako nag-aral and nagsayaw muna, kasama ang grupo ko. Sa kanila ko rin na-discover ang pag-po-pole dancing."

"Pole dancing is not easy," says Garbo. "Puwede kang masugatan at magkapasaduring practice. But, I really want to learn it, to be good at it, so I endured the pain."

Anna Marie displayed the strength and the stamina to do her pole- dancing routine. She climbs the pole and slides on it with ease. However, it seems that hanging on the pole is cumbersome for her.

The acrobatic couple of Isaac and Jocelyn comprise the Zion Show. The two first met when Isaac's family and Jocelyn's group partnered in a circus act. When the contract of Jocelyn's group ended and had to return the Philippines, Isaac admits, "Jocelyn and I have become good friends that time and I believe that she is really talented so I requested my tatay to make her part of our group. Nakumbinse ko naman and since then, the two of us have become inseparable. From being friends, siempre na-develop and eventually, we got married and raised our own children."

"We learned about the show through the Internet," reveals Jocelyn. "We wear already planning to return to Manila and send our kids to school here. We first appeared in P.O.5 and someone from the show told us na subukang mag-audition sa Talentado. So, ganun nga ang ginawa namin. May swerte rin siguro kami kaya umabot kami sa grand finals."

The 90-minute routine of Zion Show that includes a lot balancing, lifting and precise moves. (CLICK HERE to view a video of their performance)

There are two sets of singing sweethearts in this year's Hall of Famers. The first, a duo billed as The Believers, Grace Valenzona and Francheska Macalino, are incoming high school students. The two girls have the same passion for singing that is why it was easy for them to be friends. Belonging to different church choirs, they sang together for the first time when they joined a contest sponsored by a shopping mall.

The repertoire of the girls consists mostly of Broadway show stoppers and operatic duos. How did they manage to do it?

The second sets of female singers are the New Born Divas. Kat, Alyssa and Jhen comprise the trio. It was through a contest in a television show that gave the three the idea of performing together. With encouragement from their peers, they started to compete in singing contests.

"Weeks later, Talentadong Pinoy called and gave us another chance," she carries on. "So, when we got the chance again, tinodo na namin ang aming powers kaya eto, we are here in the grand finals."

During the press conference, the New Born Divas did their version of Christina Aguilera's "Candy Man."

The two-day Battle of the Champions will air live on the Talentadong Pinoy timeslot (after L.O.L. on Saturday, March 12, and after Magic Gimik on Sunday, March 13).