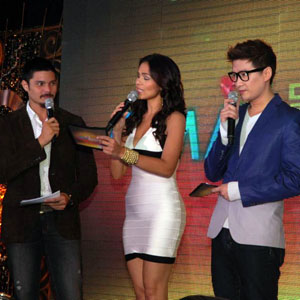 "GMA Network, Inc. (GMA) recently hosted luncheon parties for its trade partners to showcase its upcoming Entertainment and News and Public Affairs launches and to celebrate its nationwide ratings dominance.

"The Network is set to be more aggressive in the succeeding period across its multimedia platforms—from television to radio to online. Flagship business unit channel 7 will air television's most expensive primetime series Amaya to be headlined by Marian Rivera; remake of Captain Barbell by Richard Gutierrez; fantasy-comedy-drama series Magic Palayok by reel and real sweethearts Carla Abellana and Geoff Eigenmann; and My Lover, My Wife by Nadine Samonte and Maxene Magalona.

"Just recently, GMA made another first with the launch of its free-to-air all-news channel. Named GMA News TV, the channel will be backed by the country's most formidable news team led by Jessica Soho, Mike Enriquez, Mel Tiangco, Arnold Clavio, Vicky Morales, and Howie Severino. The channel will start airing February 28 and will have its international launch mid-2011.

"GMA News and Public Affairs' (N&PA) online counterpart, GMA News Online (with URL www.GMANews.TV), branded as the "go-to portal for Filipinos everywhere", has often been first with news. It is ran with a multimedia content (i.e. news videos from TV and livestream from Radio), and other web innovations such as news browser and election dashboard.

"GMA Marketing and Productions, Inc. (GMPI) President and COO Lizelle Maralag expressed excitement on the trade's overwhelming approval of GMA's efforts. "We are very happy that we are able to cement our partnership with the market thru our platforms and creative executions. The sales force anticipates a continued venture with the market as GMA unfolds its offerings across all media," Maralag said.