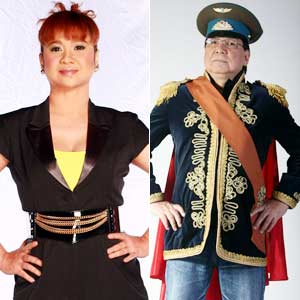 TV5 offers alternative Sunday afternoon viewing with the launch of its Tanghaling Go-Go-Go! block this February 27.

Kicking things off at 12:00 noon is the fun and exciting game show Pinoy Samurai bannered by ace comedian Joey de Leon, who will be assuming the character of Emperor Yoje.

Pinoy Samurai follows the adventures of thirty contestants all vying for the right to claim supremacy over the competition.

The road to prestige, however, will be tough as a series of obstacles including a cast of characters like Tiny the giant sumo wrestler; Godzira, the not-so-sturdy monster; Kulang the skinny Barbarian; Princess Hentay; as well as Captains Tamagotchi, Fugo, Sogo and Sushi warriors are all set out to derail the contestants.

The Sunday television noontime slot for a long time is home to musical variety shows, making TV5's offering an "alternative" for the audience to appreciate.

To register, home viewers will have to earn two numbers (based on the last seven digits of the cellphone number) from six magic numbers generated. One lucky phone contestant is then selected to participate in the tension-filled money end-game where they can win up to P1 million in cash prizes.

Star Factor's prized finds--Ritz, Christian, Sette, and Eula--along with the rest of the mentioned show's teen stars will prove that they are ready to embrace the limelight.