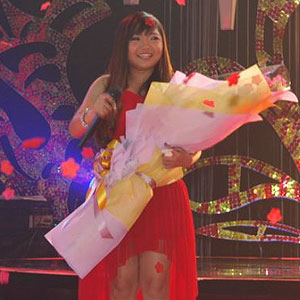 "Charice [in photo] liked the concept of telling her own inspirational story in between her favorite songs. Thus, she accepted the offer. I guess nobody thought of doing it before. We're happy to have been the first to make the offer," said GMA-7 Senior Vice President for Entertainment Wilma Galvante.

"With the overwhelming success and high rating of Charice's TV special titled Charice: Home for Valentine's last February 13, GMA-7 "would definitely welcome the opportunity" to work with the international singing sensation again.

"GMA-7 Senior Vice President for Entertainment, Wilma V. Galvante, expressed the network's delight on being privileged to have such a project with Charice.

"She's based in LA right now, but she was so easy to work with. She has a great energy about her," said Ms. Galvante.

"Being the first in giving Charice a TV special, many wonder how GMA-7 made it happen. Ms. Galvante explained that the network simply proposed the project to Charice, who currently does not have an exclusive contract with any network.

"Charice liked the concept of telling her own inspirational story in between her favorite songs. Thus, she accepted the offer. I guess nobody thought of doing it before. We're happy to have been the first to make the offer," Ms. Galvante added.

"Michael V and Ogie Alcasid are Charice's personal choice for her guest performers. She also wanted to sing with Regine Velasquez-Alcasid but Regine was busy with her current program, I Heart You Pare. On the other hand, GMA-7 thought that Elmo Magalona and Rachelle Anne Go "fit the young vibe of Charice perfectly."

"Ms. Galvante is also thankful to the Production and Creative teams led by Darling De Jesus, Gigi Santiago-Lara, Bang Arespacochaga, Direk Louie Ignacio and Musical Director Homer Flores for the "huge success" that the project was.

"Due to Charice's projects in the U.S., GMA-7 is uncertain as to when the world-famous Pinay will be back in the country. In any case, Ms. Galvante communicated the network's desire "to offer her more projects in the future."