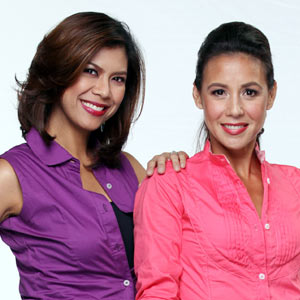 Suzi Entrata-Abrera and Christine Jacob are happy that their show, Full Time Moms, is one of two locally produced shows from the Q Channel 11 program line up to make it to the reformatted station, GMA News TV.

Full Time Moms is one of only two locally produced shows from the Q Channel 11 program line up to make it to this reformatted station. Hosts Christine Jacob-Sandejas and Suzi Entrata-Abrera share, "We're happy! We were praying that we would still stay and we're absolutely thrilled, kasi dalawa lang kami na naretain, kami at ang Tweetbiz."

Full Time Moms has been airing on Channel 11 for nearly a year and a half and the reformatted show promises to discuss varied topics that will interest mothers from all walks of life. Suzi says, "Excited rin kami makita kung ano rin yung ibang shows na ipapalabas and most of the entertainment/talk type shows nilagay sa hapon, kaya andoon kami."

What makes this show different now is the inclusion of new segments like "Liga ng Kababaihan with Nanay Elma Muros," "Lusog Barangay" (featuring health issues) and visits to the provinces.

Tess Bomb is a semi-regular host for the "Lusog Barangay" segment where the show goes to barangay health centers to look after their needs and interact with mothers in those centers. Liga will be shown once a week and it aims to showcase the achievements of women in those areas who strive to help their communities and families for the better.

Aside from Elma who is known in the field of running, host Christine is also known for being active in swimming. Christine says she's open to doing something on the show that would tackle her favorite sport if the opportunity presented itself.

HANDS-ON HOSTS. When it comes to the show, both hosts are quite hands-on in suggesting content and ideas. Suzi shares, "Throughout naman, even before the new timeslot and new format, involved na kami, they're very open to our ideas, although hindi kami kasama sa once a week meeting [ng production team]. We suggest what we think will work better, and the team is very open to suggestions."

Direk Bibeth reveals that the hosts even text their ideas to her at 1:30 in the morning. Christine laughingly admits, "It came to me in a dream and I said let's try this!"

Suzi recalls a touching story of a woman who was featured on the show when she was trying to get pregnant for several years. When she finally got pregnant, the viewer reached out to Suzi, making the TV host impressed by the impact that they have on viewers on a personal level.

The two female hosts have discovered a lot about each other after more than a year of working together. "There are challenges and certain things na na-stretch doon sa kakayahan namin, like yung mga sayaw-sayaw na dati naman wala..." Suzi continues on to say that she was initially shy about doing some of the challenges on the show but she eventually learned that they took her out of her comfort zone.

Suzi even says that it was Christine's influence that pushed her to become more physically active. Suzi jokes, "Tamang normal lang naman ang mga tao sa Unang Hirit, pero Christine has inspired me to eat better, be more athletic, get fit again. Christine has been a positive influence on me, except kung nagbabakasyon ako, wala naman si Christine doon!"

Hosts Christine Jacob-Sandejas and Suzi Entrata-Abrera are indeed the perfect fit for Full-Time Moms as they continue to live as mothers to their own kids. Their new opening billboard sets this tone well as it shows the two hosts having fun with moms from different professions.

Direk Bibeth also noted that, "there's been a shift, from the show's look to the hosts' clothes that need to look more active." Since they moved to an afternoon timeslot, the show needs to compete for the attention of mothers who might be busy because of the arrival of their kids from school. For this reason, they plan to feature "active" segments that go out into the field and not rely on all-talk segments.