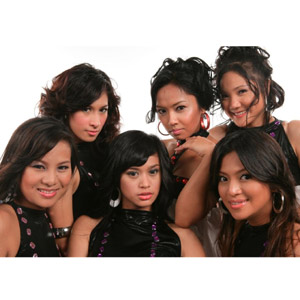 Jopay Paguia (center), who appears here with her co-SexBomb Girls, was the subject of a feature by the ABS-CBN showbiz talk show The Buzz in 2005. GMA-7 and FOCUS (Focus Entertainment, Inc.) claim the showbiz talk show aired portions from the GMA-7 and FOCUS-produced show Daisy Siete (where Jopay and the Sex Bomb Girls star in) without their consent or authorization.

"The Assistant City Prosecutor of Quezon City recommended the filing of an information against eight (8) employees and talents of ABS-CBN Corporation (ABS-CBN) in relation to the complaint for violation of the Intellectual Property Code lodged by GMA Network, Inc. (GMA) and Focus Entertainment, Inc. (FOCUS).

"The complaint stemmed from the alleged unauthorized airing of particular portions of the opening billboard of the drama program Daisy Siete showing images of Jopay Paguia with graphics 'Jopay Paguia' appearing at the bottom of the screen over ABS-CBN showbiz talk show The Buzz on February 13, 2005 without the authorization or consent of GMA and Focus.

"GMA and FOCUS had a joint venture under a Co-Production Agreement for the production and airing of the said afternoon drama program.

"In a Resolution dated September 12, 2008, Assistant City Prosecutor Vesta Victoria Giner-Villamor found that 'there is probable cause to charge [respondents from ABS-CBN] with violation of Section 177 and Section 211 of the Intellectual Property Code.'

"The Prosecutor's Resolution is based on the finding that The Buzz 'is born from their collective effort of brainstorming and meetings. There is no merit to their defense of ignorance. Human experience and logic would dictate that these respondents who are experienced employees in the field of broadcasting knew before hand that a news item of Jopay Paguia would be tackled in their program. This fact should have put them on guard instead of making it appear that they were ignorant of the intended airing of the footage of Daisy Siete without the consent and authority of FOCUS or GMA.'

"Endrinal, meanwhile, who was singled out as member of the executive management, is found to be liable as the other members of the production staff as he has direct supervision over the show and its production staff."

Ed's Note: When content falls under "Press Statement," this means that the material is fully and directly from the company itself. The use of open-and-close quotation marks to envelope the entire text shows as much. This also means that PEP is not the author of the statement being read. PEP is simply providing the information for readers who may be interested