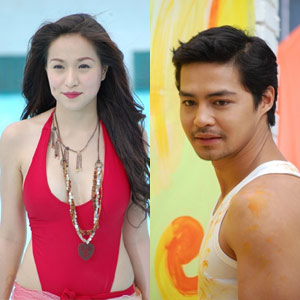 Cristine Reyes and Zanjoe Marudo are some of the stars who grace the 2011 ABS-CBN summer station ID with the theme "Bida Best sa Tag-araw."

Year after year, the launch of ABS-CBN's station ID is an anticipated event for Kapamilya loyalists who expect much from the network.

The Kapamilya network seems to have found the perfect formula: They take a familiar concept and inject it with something fresh and innovative.

This year, ABS-CBN surprises us again with a theme that is obvious, yet comes out unexpected.

When you say summer, you automatically think of beaches, water sports, people in swimwear, summer food, cold drinks. Consistent with this year's Bida Best campaign, the network tells us to "Bida Best (Be the Best) sa Tag-araw." It urges viewers to treat summer as the time to to explore talents, hone skills and unleash passions.

With the sheer number of ABS-CBN stars, it's impossible to feature all their interests, so most of them are shown jumping on a giant trampoline. It captures the playful side of Kapamilya stars. They jump in slow motion, blow kisses to the camera and make funny faces, with the clear blue sky as background.

Most Kapamilya fans noticed the absence of several big stars in the SID. This is understandable as it must be difficult to coordinate the schedules of the major stars for this production.

(Side Note: While we understand that the producers worked hard to give all stars equal airtime, we noticed that Zanjoe keeps appearing throughout the video. Is he being groomed as the Kapamilya network's next big star?)

The song for the 2011 ABS-CBN summer station ID is upbeat, young and catchy. Kapamilya newcomer Angeline Quinto leads the vocals (with Vincent Bueno and rapper J.O.L.O.). It's refreshing to hear her sing, not belt out high notes for a change. She actually has a good voice for this style of music but that's another story.

The "Bida Best sa Tag-araw" jingle, with Davis's music, and lyrics by Love Rose de Leon and Nino Anglo is excellent. I believe if it were released commercially, it would be a hit.

The video's length, however, forces the last part of the song to be repetitive, like those last song syndrome-inducing shampoo jingles. The melody plays in your head throughout the day and beyond.

All in all, the team's effort is commendable, especially directors Richard Ang and Paolo Ramos. This is yet another well-crafted summer station ID, which is the "summer anthem" to beat.