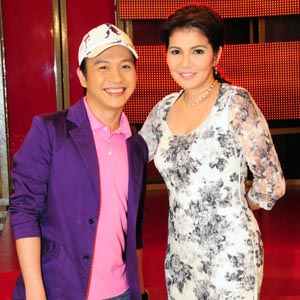 "From its humble pilot episode one year ago, Face to Face has emerged to become the most watched daytime program on Philippine TV. On its first anniversary, the pioneering 'talak-serye' pays back to its millions of viewers by presenting the show's most explosive episodes yet from April 4 to 8 (Monday to Friday) and through a special anniversary segment titled "Abot-Kamay, Kapatid" that reaches out to the people who have been part of the show.

"Starting on Monday (April 4), Face to Face showcases a series of special episodes that feature the next talk-of-the-town stories, major confrontations, tear-jerking revelations, infidelity caught-on-camera and a grand wedding spectacle—all in one week. It also highlights "Abot-Kamay, Kapatid," a gift-giving segment for the benefit of past case subjects of the number one daytime show.

"As it enters its second year, the "Barangay Hall On-Air" continues to mirror domestic and communal conflicts of Filipinos, and tries to resolve every single dispute by pinning down the root cause of the problem with host Amy Perez as a referee and the Trio Tagapayo—comprised of Public Attorney's Office (PAO) chief Atty. Persida Acosta and Atty. Ben Persida, legal experts; Fr. Sonny Merida and Fr. Gerry Tapiador, spiritual advisers; and Dr. Camille Caces-Garcia, resident psychiatrist—sharing their expertise to infuse reason amidst warring parties.

"'The overnight success of Face to Face on daytime is proof that no formula works every time on TV. We've witnessed how Face to Face soared to become the most favourite program among thousands of households over the past year. We're proud of this show because it continues to offer venue to discuss, and hopefully fix problems,' said Mr. Perci Intalan, Head of Entertainment and Creative Production of TV5.

"The success of Face to Face also gave birth to a spin-off show that narrates the real accounts behind the most remarkable stories tackled on the show—Untold Stories Mula sa Face to Face. The drama anthology is also hosted by Amy Perez and airs every Thursday night after Mga Nagbabagang Bulaklak.