AXN Beyond unveils Camelot: The Story That Was Never Told 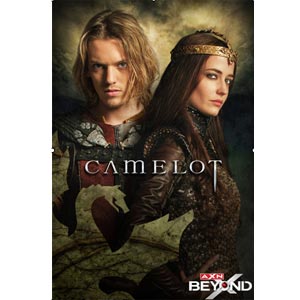 Jamie Campell Bower and Eva Green star as Arthur and Morgan in Camelot, which will air every Monday, starting tonight, April 4, at 9 p.m., on AXN Beyond.

PRESS STATEMENT FROM AXN BEYOND:

"The myth of King Arthur has inspired many movies and drama series. If you believe you have seen it all, maybe it's time to forget everything you think you know. Tonight, April 4, at 9 p.m., AXN Beyond brings you Camelot, a dark and gripping take on the medieval legend that was never told.

"Camelot is the first drama series on AXN Beyond to have a simulcast across Asia in the same week as its U.S. broadcast.

"Setting itself apart from other shows that have explored the Arthurian legend, Camelot traces the rise of young king Arthur as he struggles to unite a kingdom torn by war, deception and betrayal.

"The kingdom of Camelot teeters on the edge of turmoil when King Uther Pendragon is suddenly murdered through supernatural means. Sorcerer Merlin (played by Joseph Fiennes of FlashForward, Shakespeare in Love) arrives too late to save the dying king, but dark visions compel him to install Uther's secret son—hidden at birth and brought up as a commoner—as heir to the throne. So begins the rise of the young and impetuous Arthur as the new king. The character will be played by Jamie Campbell Bower of Sweeney Todd: the Demon Barber of Fleet Street, The Twilight Saga: New Moon)

"Allying with dark supernatural forces and the kingdom's enemies, Morgan, Arthur's beautiful but ruthlessly ambitious half sister, who will be played by Eva Green of The Golden Compass and Casino Royale. She is responsible for Uther's death. She also wages a bitter war against Arthur to claim the crown.

"In such trying times, Arthur finds the innocent yet strong Guinevere (played by Tamsin Egerton of St Trinian's and Keeping Mum). He will serve as a beacon in the darkness and inspiration for him to grow into the king he has to become.

"Guided by Merlin's magical foresight and belief, and aided by his brave knights, Arthur sets forth to bring justice, hope and freedom to a kingdom corrupted by violence, greed and despair.

"Camelot was shot amid stunning scenery in County Wicklow, Ireland, including on location at the stately Luggala Castle and the magnificent Powerscourt Estate. Dubbed the "Garden of Ireland" at the eastern frontier of the country overlooking the Irish Sea, County Wicklow, with its breathtaking rolling hills, was also where hit period drama series The Tudors was shot.

"Achieving the production quality and visual experience akin to that of movies today, Camelot is shot on a budget of almost US$50 million, with up to 400 cast and crew members involved.

"The 10-part series is an Irish-Canadian co-production by GK-tv, the television division of Graham King and Tim Headington's GK Films, the production studio behind the 2010 movie, The Tourist. The series is created by British screenwriter Michael Hirst, who was behind such works as The Tudors and movie Elizabeth: The Golden Age, and penned by Chris Chibnall of Torchwood and Life on Mars.

"Drawing inspiration from Thomas Malory's literary classic Le Morte d' Arthur, Chibnall revealed that viewers of Camelot will not miss out on signature events and characters, such as the 'sword in the stone', the 'Lady of the Lake', and the beginnings of the Round Table—but none will be like what have been done before.

"Camelot promises an experience beyond your imagination as the epic, untold story is revealed tonight, April 4, on on AXN Beyond."