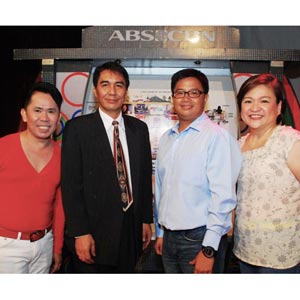 ABS-CBN announced that it is targeting the release of the Digibox by June 2011. Executives of the Kapamilya Network are still awaiting the guidelines of the National Telecommunications Commission about digital broadcasting.


"ABS-CBN announced on April 4, 2011 that it is ready to launch five new premium channels on free-to-air TV via Digital Television (DTV), a high-tech standard that uses digital signals for broadcast.

"DTV also produces better picture and sound compared to the prevailing analog system. The digital TV viewing experience is comparable to seeing a movie on DVD. This spells more excitement for the viewers. Thus, climatic moments like the bus explosion in Mula Sa Puso or the kidnap scene in Mara Clara become more heart-pounding when seen on DTV. Musical numbers on ASAP XV are captured in more colorful detail. News on TV Patrol is delivered in crisper sound.

"According to Miguel Mercado, ABS-CBN DTV Head of Marketing, viewers need not wait long because ABS-CBN is ready to launch DTV operations within the year. He said the company is just waiting for the final go-signal from the National Telecommunications Commission (NTC).

"With Philippine broadcasting companies going digital, the viewing public will be able to enjoy digital quality viewing in any TV as DTV addresses the issues of poor reception, grainy pictures and choppy audio," says Mercado.

"Upon the purchase of an affordably priced DTV Digibox to be connected to the television set, viewers will be able to enjoy the five new channels for free, in addition to all existing channels broadcasting in digital. By time ABS-CBN DTV is launched, this list will include Channel 2, Studio 23, GEM TV and NBN.

"ABS-CBN expects other broadcasters to follow suit since the NTC has directed the local television industry to make a complete transition to digital by 2015. NTC's mandate will certainly benefit the general public as it puts the Philippines at par with the international standard. DTV is the system followed in the U.S., Japan, Australia, South Korea and most of Europe.

"ABS-CBN has been preparing for the switchover since 2007. Recently, the network conducted DTV trials in more than 1,000 households all over the Philippines. Participants responded very positively.

"Moreover, the viewers expressed willingness to buy the DTV Digibox (which costs only as much as a DVD player) so that they could get the new channels for free. As one mother cited, "Wala ng monthly fee. One time ang pagbabayad. Magugustuhan ng anak ko."