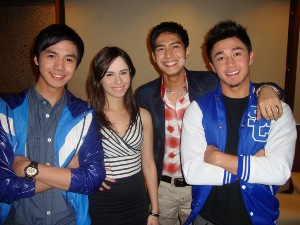 "Sarah Geronimo ruled the Pinoy music scene among Kabarkadas as she bagged the Choice OPM Artist of the Year award as her leading man in the hit movie Catch Me, I'm in Love, Gerald Anderson, also took home his first Barkada Choice Award for the Choice Male Icon category.

"When it comes to sports, Team Azkals dominated as they won the Choice Sports Celebrity. Brothers Phil and James Younghusband accepted the award on behalf of the team to the delight of the screaming fans.

"Meanwhile, Anne Curtis proved she is the queen of Twitterverse as she was named the Choice Tweet Idol. Robi Domingo also proved to be the public's favorite Studio 23 personality when he bagged the Choice Kabarkada of the Year.

"David Archuleta thanked his Pinoy fans on his Twitter and tweeted, "Wow! Thank you so much Pinoy fans for the Barkada Choice Award for Teen Choice Icon!!! That is so neat!!! You guys are awesome!"

"Winners were determined based on text votes. The event was hosted by Gretchen Fullido, Sam Concepcion, and Aaron Atayde. Jessy Mendiola, Charee Pineda, Bret Jackson, and Ivan Dorschner also graced the event as presenters while Angeline Quinto gave a goosebumping rendition of the song "I don't want to miss a thing" and Arron Villaflor and Fretzie Bercede gave their respective dance numbers.

"The 1st Barkada Choice Awards was organized by Studio 23 and aims to recognize local and international personalities that made a mark among its viewers. Watch it in two-parts on Monday and Tuesday (April 18 and 19), 6:30 PM, on Studio 23."