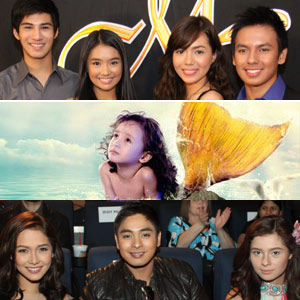 According to Kantar Media, the top three most-watched programs nationwide for the first quarter of 2011, were (from top to bottom) Mara Clara, Mutya and Minsan Lang Kita Iibigin.

"The Kapamilya teleseryes' compelling stories continue to grip viewers nationwide and earn the highest TV ratings on primetime. This evening slot is when most Filipino viewers watch TV and advertisers spend the most for commercial placements.


"Kantar Media/TNS, the trusted global market research group that offers audience research measurement systems in 32 countries, reported that ABS-CBN got nine out of the top 10 most-watched programs last month. Mara Clara topped the list with 35.9% despite the new primetime offering of its rival station, Captain Barbell, that registered only a national TV ratings of 20.7%.

Mara Clara (31.1%), Minsan Lang Kita Iibigin (26.2%) and Mutya (26.1%) are also the top three most watched programs in Metro Manila beating all other GMA offerings on all time blocks.