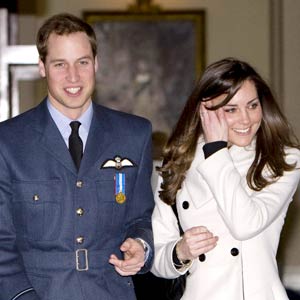 "Every girl dreams that one day she will meet her one and only prince charming. Little did girl-next-door Kate Middleton know that her fairy tale love story will turn into a reality as she will soon live happily ever after with the heir to the British throne, Prince William of Wales.

"You are invited to be their royal guest and witness history and romance unfold at the same time as ABS-CBN Corporation, the largest multimedia conglomerate, partners with BBC, the world's largest broadcasting organization, to bring you the most comprehensive coverage of the much-awaited royal wedding of His Royal Highness Prince William of Wales, the famous son of Prince Charles and the late Princess Diana, to Catherine Middleton with the exclusive telecast of BBC special documentaries and the live coverage of the wedding on April 29.

"See where it all began in the BBC special documentary William and Kate: A Royal Engagement on April 24 before ASAP Rocks. Find out how the two met, get to know the future British princess, and understand what what this marriage means to the future British monarchy as close friends, historians, biographers, and well known journalists reveal what they know about the royal couple.

"ABS-CBN will also air documentaries Harry: The Mysterious Prince, How to be a Prince, Timewatch: Princess Margaret--A Love Story, Diana--Legacy of a Princess, Princess Camilla--Winner takes all, Royal London, Britain's Royal Weddings, and Untold Stories of a Royal Bridesmaid on its cable channels ANC and the Lifestyle Network.

"On the wedding day itself on April 29 (Friday), ABS-CBN will launch a powerhouse coverage dubbed The Royal Wedding of the Century straight from BBC over the network's multimedia platforms which cover free-to-air TV, cable TV, radio, and online.

"Catch only on ABS-CBN's coverage the exclusive report on the preparations and events leading to the Royal Wedding from world-renowned broadcast journalist and BBC top anchor Huw Edwards, the presenter of Britain's most popular television news bulletin, BBC News at Ten.

"A true expert on the Royal family with over two decades of experience in BBC, Edwards will be able to give Filipino viewers an insider's look at the biggest and most anticipated event in the world so far this year.

"Apart from Edwards, ABS-CBN Europe Bureau chief Danny Buenafe and correspondent Rose Eclarinal will also guide us through the event all the way from the United Kingdom with reports during the hourly updates on ABS-CBN to be anchored by award-winning broadcast journalist Karen Davila. ABS-CBN's coverage on free-to-air TV will culminate in TV Patrol with anchors Noli De Castro, Ted Failon, and Korina Sanchez.

"ANC, the ABS-CBN News Channel, will also offer a nonstop look at the wedding to be anchored by Ces Oreña Drilon and David Celdran. Catch updates on William and Kate's nuptials while on the road via live reports on DZMM Radyo Patrol 630.

"Get an intimate look at the beginnings of William and Kate's love story up to their much anticipated exchange of vows only on ABS-CBN, the only Filipino channel that will air not just the live coverage of the royal wedding but also exclusive documentary specials on William and Kate through a partnership with global news giant British Broadcasting Corporation (BBC)."