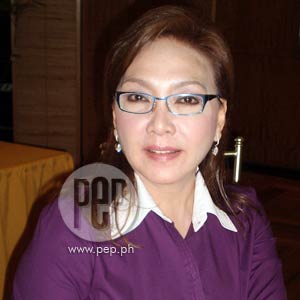 Mel Tiangco is the host of Powerhouse, a program that airs on GMA News TV Channel 11. This show features the homes of controversial figures.

"We wanted to learn how powerful people live. We wanted to humanize those who make the news. That they're not just about business or politics, they too, have concerns similar to ordinary people. This is also a great opportunity to learn from their failures and success." This was how program manager Nena Celle Dumol described the new show of GMA News TV Channel 11 called Powerhouse.

This program will let viewers see the houses of the powerful, influential and controversial personalities in the country. In addition, Mel will have the chance to ask the featured person some controversial questions that have remained unanswered.

Mel Tiangco admits that she enjoys entering the houses of these personalities. She also relishes the idea of gaining access to persons who made headlines because of the controversies surrounding them.

INITIAL RESERVATIONS. Mel Tiangco was the personal choice of the producers to host Powerhouse. At first, she was hesitant to accept their offer because of her workload. But after reading the concept of the program, she changed her mind.

"Naisip ko, oo nga 'no, parang maganda yung show, maganda yung concept, parang it might bring out also something in me that I haven't practiced for a long time."

The host even joked that sometimes, she surprises her staff by posing difficult questions without even planning for it. The 24 Oras host credits this to her journalistic background.

She also gives her suggestions on whom to feature for the program. She prefers to interview people who have already been through the controversies, the issues, because it will be easier for them to give answers.

"Pero alam mo, gusto ko sana tapos na siya dun sa mga controversies. You know, he dealt with that already; it's easier for the person to answer and for the journalist to ask him the question. They've already overcome whatever it is, they've moved on, so madaling tanungin."

When asked to name whom she would like to interview on the show, Mel gave the name of Imee Marcos. Mel explained:

APPRECIATING ARCHITECTURE. Since she features a lot of houses with breathtaking designs it would be normal for Mel to admire some of them. Among the houses that she has visited so far, her personal choice is the house of Christina Ponce-Enrile.

"I like to see the Ponce-Enrile house, because it was very unique, walang pinto. It's an open, open sala, leading to the lanai, leading to the garden. It was open. I was so shocked. You know I asked her about it, is my observation true? You cannot close this area of the house? 'Oh we have five security guards, that's ok.' Isn't that surprising to hear?"

Powerhouse is a new show that would give viewers a different side of these personalities. They will be given a chance to see their lives behind all the influence, the power, the fame and money.

Powerhouse airs every Monday at 10:30 in the evening on GMA News TV Channel 11, hosted by Mel Tiangco.