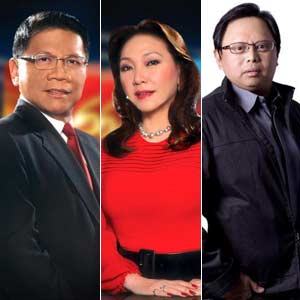 The civil complaint for damages against (L-R) Mike Enriquez, Mel Tiangco and Arnold Clavio has been dismissed by the Regional Trial Court. Their case stemmed from reports that aired on GMA-7 from August 8 to 12, 2003.

"The Regional Trial Court (RTC) of Manila recently dismissed the civil complaint for damages filed against GMA Network, Inc. (GMA) in relation to a story which aired over GMA during the period August 8 to 12, 2003.

"Plaintiff Dolores Domingo filed the complaint against GMA and its broadcasters Mike Enriquez, Mel Tiangco and Arnold Clavio owing to the alleged "filthy and malicious story" that she acquired unexplained and incommensurate wealth as Customs Operating Officer IV at the Bureau of Customs (BOC) with only a salary rate of Grade 18.

"In a 12-page Decision penned by RTC Judge Carmelita S. Manahan dated March 15, 2011, the court cited the Supreme Court ruling in the 1999 case of Borjal vs. Court of Appeals that "fair commentaries on matters of public interest are likewise privileged... the doctrine of fair commentaries means that while in general, every discreditable imputation publicly made is deemed false, it is not necessarily actionable. In order that such discreditable imputation to a public official may be actionable, it must either be a false allegation of fact or a comment based on a false supposition."

"Further, the RTC Decision quoted the Supreme Court's finding in the Borjal case that "no culpability could be imputed to petitioners for the alleged offending publication without doing violence to the concept of privileged communications implicit in the freedom of the press."

"Domingo, with another BOC employee Chito Orbeta, was reported to have acquired luxurious cars and mansions in exclusive subdivisions based on public documents such as, the Statement of Assets and Liabilities, Deed of Sale, and Certificate of Registration and Official Receipt issued by the Land Transportation Office (LTO).

"Then production unit manager (PUM) for GMA Public Affairs Ianessa Valdellon testified during trial that there was no truth in Domingo's allegations that she (Domingo) was imputed to have committed the crimes of unexplained wealth, graft and corruption under the anti-graft and corrupt practices act.

"Instead, Valdellon said that what aired over GMA was straight reporting on the basis of public, official and commercial documents, which Domingo herself signed and filed as a government employee at the BOC.

"Domingo and Orbeta jointly filed a libel case versus GMA and its broadcasters Enriquez, Tiangco and Clavio. The case was dismissed on September 17, 2004 in a Joint Resolution by the City Prosecutor of Manila. Orbeta also filed a complaint seeking damages from GMA but it was also dismissed in a Decision dated January 14, 2009 by RTC Manila."