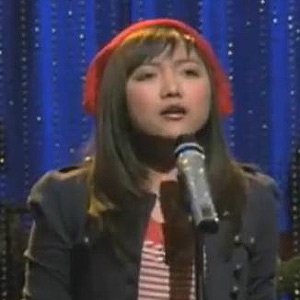 The Filipina singer said it was "never-wracking" for her to shoot this episode of Glee Season 2.

The red-beret loving character Sunshine Corazon will be part of Glee once again!

Viewers last saw Charice in the pilot episode of Glee Season 2, where she engaged in a singing showdown with Rachel Berry (played by Lea Michelle) via the song "Telephone."

Seeing Sunshine as a threat, Rachel tricked the Filipina exchange student into going to a crackhouse. Still, Sunshine managed to audition for the New Directions glee club, wowing everybody with her rendition of "Listen."

Eventually, Sunshine got a better offer from Vocal Adrenaline, prompting her to switch to the rival glee club.

In the upcoming episode of Glee, Sunshine will be facing the New Directions members to offer her help for their upcoming benefit concert.

In a brief preview uploaded on TVGuide.com, Sunshine denies allegations that she was spying on the New Directions glee club. She also guaranteed that her "600 Twitter followers" would watch the concert.

She made an emotional appeal, saying, "Please let me show you what I can do. I'd like to sing the perfect song about neglect: 'All By Myself.' I'm such a better singer than everyone else so I know how it feels.

"I'm all alone at the top. Also, I'm really short, so even when I'm in a group of people I feel like I'm wandering alone in a forest."

NERVE-WRACKING EPISODE. In a separate video interview, Charice admitted that: "It felt like I was shooting the first episode again. It was nerve-wracking! I just couldn't believe it. I'm here again. It felt like the first time."

She then revealed that for this episode, "I will be singing 'All By Myself' by the legendary Celine Dion. When I found out about the song, I freaked out.

"It's been crazy. I've been singing that song since I was a kid. That song has been a part of my life!"

The "Night of Neglect" episode will be aired April 19 on Fox TV in the U.S., and April 20 on cable channel ETC in the Philippines.