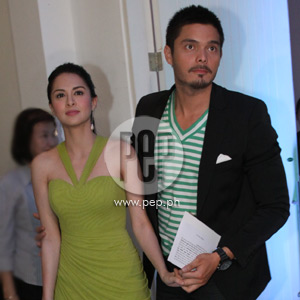 A Marian Rivera and Dingdong Dantes dance number will be one of the segments to be aired anew this Sunday on Party Pilipinas.

"From the most exhilarating to the most popular, Party Pilipinas picks out from among a year's worth of exciting numbers some of the best executions ever seen on the program.

"Then witness once more a breathtaking production number from Shinky Girls, Rachelle Ann and Kyla followed by an equally stunning performance from the Glam Girls, Heart, Bianca, Carla, and Glaiza.

"Other highlights of the show are a duet from the lovable tandem of Julie Anne and Elmo, a dance number from Dingdong Dantes and Marian Rivera, another dance presentation from Aljur Abrenica, an all-boys number from Dennis Trillo, Mark Bautista, Gian Magdangal, and Janno Gibbs, and a scintillating dance number from Solenn Heusaff and Lovi Poe, among others.

"Catch all these and more on Party Pilipinas Rewind this Sunday, April 24, after Kapuso Movie Festival on GMA-7."