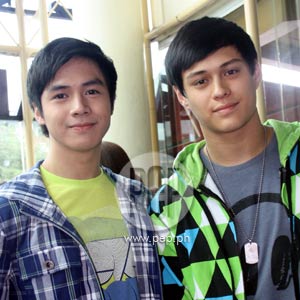 This Easter Sunday, Marc (Sam Concepcion, left) and the rest of the dance troupe will help Troy (Enrique Gil, right)organize a fundraising event for Childhaus, a facility that serves as a home to young patients with grave illnesses.

"There will be a ceasefire between the characters of Sam Concepcion and Enrique Gil this week on Good Vibes as the country's favorite teen barkada observes Holy Week with the rest of the nation.

"In the program's Easter Sunday special, Marc (Sam) and the rest of the dance troupe will help Troy (Enrique) organize a fundraising event for Childhaus, a facility that serves as a home to young patients of grave illnesses. Troy's mom, who died of cancer, supported Childhaus when she was still alive.

"Will this serve as a bonding activity that will pull the brothers closer? Or will it cause more conflict? Also find out this week why Marc and Monique (Coleen Garcia) broke up, and why she's still miffed about it.

"Meanwhile, being of service isn't just part of an act for Sam and Enrique, who both actively participate in charitable efforts. Sam is a World Vision Ambassador for Children, and has gone to far-flung communities to bring cheer and inspiration to kids.

"Enrique, on the other hand, used to be a volunteer for 'Street Pals,' an outreach program for street children.

"These good deeds in the show and in real life seem to bring the show good karma as the program continues to get rave reviews. Viewers praise the program not only for its polished production value and the great acting of the cast, but also for having substance and a relevant story that the Filipino youth can relate to and learn from.

"Good Vibes is also performing very well in the ratings game based on data from Kantar Media. With a solid rating of 11.3 percent compared to only 9.8 percent for GMA-7's Tween Hearts, the show was the runaway winner on its timeslot last Sunday (April 17).

"Catch the whole crew of Good Vibes this Easter Sunday (April 24) after ASAP Rocks on ABS-CBN."