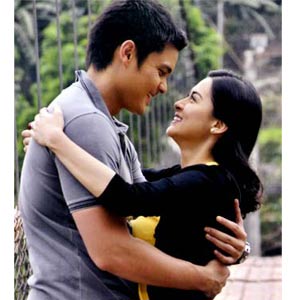 The Philippine TV premiere of Dingdong Dantes and Marian Rivera's romantic comedy, You To Me Are Everything, will air this April 21.

"At 10:30 am, revisit the life of Philippine's national hero in the movie Jose Rizal as portrayed by Cesar Montano. This is followed by Richard Gutierrez and Angel Locsin's Let The Love Begin and Mark Herras and Jennylyn Mercado's Lovestruck. CBN Asia's Tanikalacomes next with its first feature, Kulam, starring Sexbomb Izzy Trazona.

"At night, the network proudly presents the Philippine TV premiere of Dingdong Dantes and Marian Rivera's romantic comedy, You To Me Are Everything followed by another Richard-Angel team-up in The Promise.

"For Good Friday, Dingdong, Iza Calzado and Karylle Padilla show how love conquers even the boundaries of time in Moments of Love. It precedes a tribute to Jesus Christ's Seven Last Words in the Siete Palabras of the Dominican Province of the Philippines.

"Programs to follow the airing of Siete Palabras are: Robin Padilla and Regine Velasquez-Alcasid's 'Til I Met You; Tanikala's second offering, Wasak; Working Girls; and the Richard-Marian tandem, My Best Friend's Girlfriend.

"On Black Satuday, the legendary winged men of Mulawin The Movie fly back on TV right before I.T.A.L.Y. (I Trust And Love You) and Michael V. and Ogie Alcasid's, Yaya and Angelina.

"In the evening, viewers can witness APT Entertainment's presentation about a complicated relationship in Maestra, topbilled by Agot Isidro and Dennis Trillo. Sen. Bong Revilla's movie adaptation of the Carlo J. Caparas classic, Ang Panday, then airs as the last movie of the night.