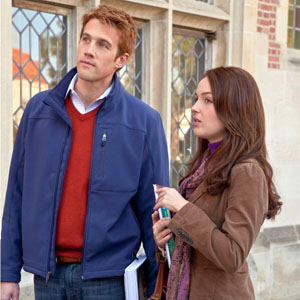 "Just before the British royal wedding ceremonies take place at London's Westminster Abbey on Friday, April 29, TV5 brings an exclusive glimpse of the much talked about telemovie and interview of Prince William and Catherine Middleton this Thursday, April 28.

"TV5 presents the exclusive Philippine free TV premiere of William & Kate, a movie-made-for-TV that tells the story of their nine-year romance and the journey leading to their much anticipated fairytale wedding.

"Filmed mostly in Los Angeles and some parts of England and Scotland, the telemovie takes a look back "from the moment they met at Scotland's prestigious University of St. Andrews, through the ups and downs of their nine-year courtship complicated by social and royal-family pressures, and intense global media attention surrounding their storybook nuptials."

"In a very rare and exclusive joint interview to mark their engagement, Prince William and Kate Middleton asked "specifically" for Independent Television News's political editor Tom Bradby to conduct the interview. As reported by leading UK daily newspaper The Guardian, Mr. Bradby is the most trusted media confidant of Princes William and Harry and is an old friend of the groom-to-be.

"In the said interview, Prince William revealed that he always knew "there was something very special about her (Kate Middleton)." The royal couple spoke openly about the marriage proposal, the preliminary details of the wedding and their future plans to build their own family.

"TV5 is the only Philippine broadcast network that has clinched the rights to air the full interview in line with its exclusive partnership with ITN to cover the royal wedding. ITN—the UK's official royal wedding channel—is the news arm of ITV, the oldest and biggest commercial network in the UK.

"Airing on the eve of the historic royal event, the interview will air on Thursday, 11:45pm (pre-empting Public Atorni).