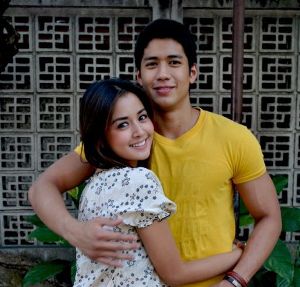 Kris Bernal and Aljur Abrenica will star in the horror comedy series Spooky Nights Presents: The Ringtone. It will replace Marian Rivera's "Bampirella" starting this Saturday.

"Having journeyed stardom together, from StarStruck to having a title role each, Aljur and Kris proved their team-up and friendship to be strong and perennial.

"Last seen in the primetime soap, Machete, the Al-Kris love team comes back in a horror comedy series inspired by Asian horror films like The Ring, The Grudge and The Eye.

"In the story, Aljur stars as a "bad boy" named Brix. He is a "maginoo-pero-medyo-bastos" type who courts a sweet girl played by Kris. Opposite him, Kris' character, Nancy is very lady-like and can even be described as very "manang." She secretly likes Brix but plays hard-to-get to the guy.

"The story begins when Brix, Nancy and their friends win a weekend treat in a resort from a radio text promo. Unknown to them, their supposedly fun summer adventure could turn ugly and even scary as they encounter a vengeful ghost of a woman named Sad-ako.

"Amid the scary and crazy situations the group runs into, their friendship is put to the test as they discover that Sad-ako haunts them because of Brix.

"Will the opposites, Brix and Nancy, end up with each other? Or will Sad-ako's revenge and claims of having a past with him dissolve the attraction Nancy has for the bad boy? Will the two and their friends get out of the haunted resort alive?

"Joining Aljur and Kris in this series directed by Lore Reyes are: Sam Pinto as Tricia, Nancy's friend and love rival; Sef Cadayona as Vanessa, the uniquely "gifted" BFF of Nancy and Tricia; Gerould Aceron as Mac, Brix's younger brother; DJ Rico Robles as Papa King, the mysterious DJ; Gene Padilla as Mang Aga, driver of the barkada; Benjie Paras as Dr. Morgan; and Moymoy Palaboy in their surprise roles.