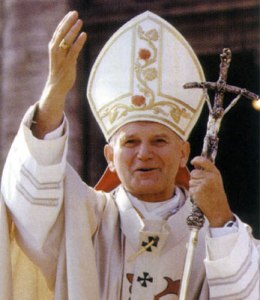 The actual beatification ceremony of Pope John Paul II will be aired live on ABS-CBN at 6:30pm on Sunday (May 1) on TV Patrol Weekend with anchors Alex Santos and Bernadette Sembrano.

"ABS-CBN will take Filipinos to the beatification of one of the most revered persons in history—the late Blessed John Paul II—with a week-long special coverage that will highlight his holiness and contributions to the world titled Blessed John Paul II: We Love You.

"ABS-CBN will also send Korina to cover straight from the Vatican City starting Thursday (April 28) on TV Patrol. The actual beatification ceremony, meanwhile, will be aired live at 6:30pm on Sunday (May 1) on TV Patrol Weekend with anchors Alex Santos and Bernadette Sembrano.

"ABS-CBN's flagship newscast also launched the Bayan Mo, iPatrol Mo: Ako ang Simula Beatification Special last Wednesday (April 27) that allows viewers and Boto Patrollers to share their fondest memories and memorabilia of the former Head of the Catholic Church, who had visited the Philippines in 1981 and in 1995. Chorale groups will also be invited to sing inspirational songs and hymns dedicated to the late Pope.

"Studio 23 will also air a special episode of Iba-Balita on May 1, as well as news updates throughout the day, to report on the beatification.

"The special coverage of ANC, the ABS-CBN News Channel SkyCable ch. 27, will begin at 4pm, anchored by Ron Cruz and Lia Andanar. It will be highlighted by the uninterrupted coverage of the Holy Mass and beatification, special live reports from the Vatican, and live discussion with a panel of special guests.

"The following day (May 2), Talkback with Tina Palma on ANC will talk about how the Blessed Pope touched the lives of Filipinos with Ambassador to the Holy See Tita de Villa, Fr. Aris Sison and Brother Dave Caesar dela Cruz.

"DZMM, on the other hand, will also give updates on the biggest religious event this year and air the actual ceremony live over DZMM TeleRadyo (Skycable ch. 26) and DZMM Radyo Patrol 630. DZMM will also invite anchors Fr. Jerome Marquez, Fr. Jerry Orbos, Fr. Nono Alfonso, Fr. Bel San Luis, and Fr. Tito Caluag to serve as panelists that will provide context to the ceremony.

"Blessed John Paul II served as Pope of the Catholic Church for 26 years until his death in 2005. He was also considered as one of the most influential leaders of the 20th century and was widely-admired for the way he lived the Christian virtues of faith, hope and love."