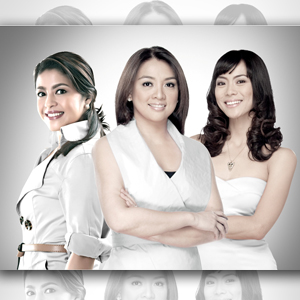 NEWS5 is broadcasting live from London by sending the biggest Philippine broadcast delegation in the UK headed by NEWS5's special correspondents to the royal wedding—Cheri Mercado, Shawn Yao and Cheryl Cosim. They will give Filipinos a VIP pass back home via The Bride & Her Prince: Kasalang Royal, the most comprehensive coverage of the royal wedding of Prince William of Wales and Catherine Middleton this Friday

"In its most complex international coverage yet, NEWS5 is broadcasting live from London by sending the biggest Philippine broadcast delegation in the UK headed by NEWS5's special correspondents to the royal wedding—Cheri Mercado, Shawn Yao and Cheryl Cosim.

"They will give Filipinos a VIP pass back home via The Bride & Her Prince: Kasalang Royal, the most comprehensive coverage of the royal wedding of Prince William of Wales and Catherine Middleton this Friday, April 29, on TV5, Aksyon TV Channel 41, Radyo Singko 92.3 NEWS FM and online news portal InterkAksyon.com.

"NEWS5's grand royal coverage is made possible by its exclusive partnership with ITN—the UK's official royal wedding channel and the news arm of ITV, the oldest and biggest commercial network in the UK.

"Supported by ITN's broadcast capabilities and an all-Filipino news team, NEWS5 presenters have been reporting live on the ground to document the nitty-gritty of the royal wedding, its relevance to the world and its connection to Filipinos. On the day of the historic event on April 29, they will deliver front-view reportage from Canada Gate outside Buckingham Palace and nearby Westminster Abbey where the actual wedding ceremonies will be held Friday at around 11am BST London time.

"NEWS5 had an exclusive one-on-one interview with Araceli Piccio, the "royal nanny" of Prince William and the only Filipino to be among the 1,900 guests invited at the royal wedding along foreign royals and celebrities.

"The fastest-growing news organization will also present in-depth reports from the world leading experts and commentators on royal wedding protocol and fashion. William Hanson, a UK-based international protocol and etiquette consultant who has been regularly featured on BBC, is working closely with Shawn Yao for this particular coverage. "Filming in central London with @shawnyao for @TV5manila. Airing throughout the week sometime," William updated on his Twitter account.

"To ensure that Filipinos are one with an expected worldwide television audience of two billion people to watch the royal wedding, NEWS5 will provide the earliest and nonstop coverage of this century's biggest royal event across all its available platforms. TV5's all-news channel Aksyon TV Channel 41 is the earliest local network to start the broadcast of the pre-wedding coverage at 3 pm with Martin Andanar and Amelyn Veloso, followed by a full-coverage on TV5 from 5pm to 8:30pm.

"At 4pm, TV5 presents When Kate Met William: A Tale of Two Lives, an ITV documentary featuring the story of how Prince William and Catherine Middleton were destined to become one of the world's most famous couples.

"Meanwhile, on the same day, TV5's AKSYON with Erwin Tulfo will have a shortened, earlier newscast at 5:00-5:45pm to make way for the live wedding ceremonies at 6 pm. NEWS5 will provide superb footages and live satellite feeds from the world's biggest broadcasters, while relying on its own news team in London for live updates bannered by NEWS5's London correspondents.

"Simulcast over TV5 and Aksyon TV Channel 41, NEWS5's continuing coverage of the biggest royal wedding event since Prince Charles and Diana's marriage in 1981 will be anchored by Martin Andanar and Amy Perez with insights from the royal experts from 5:45pm to 8:30pm.

"If you're away from TV, Radyo Singko 92.3 NEWS FM delivers up-to-the-minute updates on this fairytale wedding event. Meanwhile, TV5's news portal InterAksyon.com has been running an online retrospect on royal romances from Charles and Diana to William and Kate via the special royal wedding page The Bride and Her Prince.

"Don't miss NEWS5's exclusive and close-up coverage of all the day's events in connection to the much-awaited royal wedding on April 29 in all its available platforms."