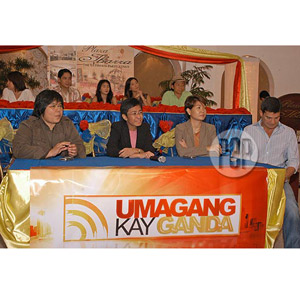 Edu Manzano (far right, first row) leads the panel of reporters and showbiz personalities who will brighten up viewers' mornings in Umagang Kay Ganda. Among those who planned this new morning show are (from left) Chari Villa, Maria Ressa, and Luchi Cruz Valdez.

Welcome a brand new morning as ABS-CBN's Umagang Kay Ganda dishes up its latest offering for every Kapamilya starting this Monday, June 25.

In the June 21 press conference of Umagang Kay Ganda at Plaza Ibarra in Timgo, the new hosts emphasized that their new show has three simple goals: to inform, entertain and inspire.

According to Maria Ressa, ABS-CBN Head of News and Current Affairs, the idea for the new show came to her after she listened to Imago's version of the song "Umagang Kay Ganda." She said that this song embodied the spirit of the new morning program. She was particularly struck by the line that goes: "Basta tayo magkasama, laging mayroong umagang kay ganda." In fact, if they could put a subtitle to their new morning show, it would be "Haharapin Natin."

REFORMATTING. Maria Ressa explains that they had to undergo this reformatting in order to keep up with the changing demands of their viewers. With the rapid rise of infotainment, they are hoping to find the "right mix that taps the credibility of news and the inspiration of entertainment."

The main ingredient they have added to this early morning show is audience interaction and participation. In line with this new format, they will be airing their show from Club O (formerly Dish) in ABS-CBN compound to make the hosts more accessible to the public.

"We want to bring in the audience of entertainment to news but it will always be news," assures the veteran journalist.

Live audience are made to truly feel the Kapamilya spirit as the tandem of Edu and Pinky grant their wish in "Kapamilyang Pinoy" while Anthony helps a deserving viewer find employment in "Aasenso Ka."

Mornings will never be complete without viewers' favorite weather and information source Kuya Kim delivering his daily weather forecast and new knowledge to live by in his segments "Pana-panahon," "Red Alert," and "Where in the World is Kuya Kim?"

Bernadette will not only give updates on our country's new breed of heroes in "Balitang OFW," she will also feature job openings abroad as well as inform viewers on the latest government policy regarding deployment.

And as a special treat to mothers, Winnie "The Palengke Queen" will dish out practical advice on how to improve your homes and lifestyles within a budget, as well as monitor the prices of basic commodities that can affect a family's finances.

Umagang Kay Ganda is one of the latest TV offerings of ABS-CBN, the station that produced such morning shows such as Alas Singko Y Media and Magandang Umaga Pilipinas.