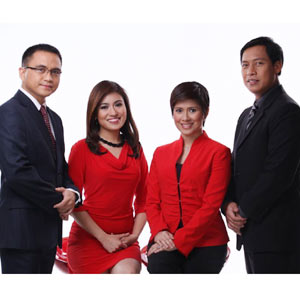 Balitanghali has beefed up serving the hottest and latest breaking news every lunchtime.

"Balitanghali was initially conceptualized as an alternative to the noontime variety shows offered by mainstream free TV," says the newscast's program manager John Ray Arrabe. "Now the newscast has gained a following and has since become a daily lunchtime habit for many viewers."

Balitanghali, which originally aired almost six years ago in the defunct QTV Channel 11, was retained in the program lineup of GMA News TV, GMA Network's News and Public Affairs news channel, which was launched last February 28.


The news program received the Best News Program award in the first Movie and Television Review and Classification Board (MTRCB) Awards in 2009.

STATE-OF-THE-ART NEWS DELIVERY. GMA Network's Studio 2 is now home to Balitanghali newscasts and boasts a brand-new, high-tech and bigger set. The program now has a new opening billboard (OBB) and new graphic and chargen templates that utilize the state-of-the-art VizRT graphics engine as it dishes out the day's biggest headlines, most relevant on-the-spot reports, most interesting features and the latest in sports and showbiz.

"We even use touchscreen visual aids now in delivering more comprehensive and updated news," says Arcangel with pride.

Since 2005, Balitanghali was at the forefront of providing unrivaled delivery of major breaking news every midday. Just within the first month of GMA News TV, the program's anchors and reporters were first-hand eyewitnesses of the political turmoil in Libya and its effects on Overseas Filipino Workers (OFWs), the March 11 Japan earthquake and tsunami and the subsequent nuclear crisis, and the execution of three Filipinos in China's death row.

AT THE FOREFRONT OF BREAKING NEWS. Veneracion, who is enjoying his first anchoring job via Balitanghali, was deployed to Japan to cover the disasters and to personally witness the Philippine embassy's effort to rescue Filipinos in the hardest hit areas.

He recounts: "I've covered many natural and man-made disasters, but none came close to the devastation I encountered first-hand in Japan. It was a chilling display of nature's fury."

What else can viewers expect from the beefed-up Balitanghali?

"Breaking news has always been the strength of Balitanghali. We will continue to be at the forefront of the latest breaking news coverage," Tima declares.

Umali adds: "Balitanghali never fails to deliver news that's unfolding now. We will deliver more live reports and interviews from different points of our country and the rest of the world."