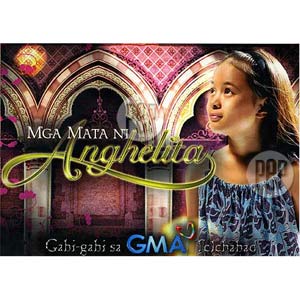 Krystal Reyes plays Anghelita, the blind young orphan who uses her newfound gift of sight to help other people.

GMA Network takes its 57th anniversary celebration a notch higher with the TV remake of a well-loved classic that captured the hearts of Filipinos in the 70s, Mga Mata ni Anghelita.

Originally penned by Ricardo Feliciano for its radio drama version (aired on DZRH, 1974-1978), Mga Mata ni Anghelita was adapted into a movie in 1978 by Larry Santiago Productions and starred the country's most bankable stars: Fernando Poe Jr., Susan Roces, Dolphy, Ramon Revilla, Sr., Vilma Santos, Nora Aunor, and the late Julie Vega. The movie became an instant blockbuster not only because of its powerhouse cast but also because of the inspiring story of a blind young girl upon whom the Virgin Mary bestowed her eyes, granting her not only the gift of sight but also the ability to help other people.

Knowing that such a remarkable story as Mga Mata ni Anghelita deserves to be re-introduced to Filipinos of this generation, GMA-7 commissioned the directorial tandem of Khryss Adalia and Gil Tejada, Jr—the same duo who directed the remake of Carlo J. Caparas's Bakekang—and drew up a powerful cast to play the characters of the upcoming primetime drama-adventure.

Reprising the title role originally played by Julie Vega is Krystal Reyes, the child actress who gained public attention for her striking portrayal of the young Kristal in Bakekang and also as the parent-seeking Princess in Princess Charming.

As Anghelita, Krystal will play the challenging role of a blind young orphan who is shunned by the townspeople because she is perceived as a jinx and the carrier of plagues. Anghelita seeks refuge in a church and finds a friend and protector in the hunchback Gabriel (Marvin Agustin).