Behind the scenes of "Boy and Kris" 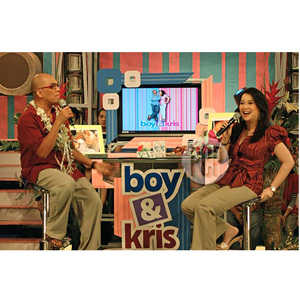 Boy Abunda and Kris Aquino treat viewers to various topics that are close to their heart.

Since Kris Aquino is new to motherhood, the new morning show Boy and Kristackled a topic that is very close to her heart—babies. This not only refers to young human offspring but also to relatively new creations such as the movie I've Fallen For You, the Kim Chiu-Gerald Anderson romantic comedy that will premiere on July 22.

Boy Abunda and Kris Aquino congratulated expectant parents Claudine Barretto and Raymart Santiago (whose child is due this July) and Senator Francis "Chiz" Escudero and his wife Christine (who are expecting twins).

PEP (Philippine Entertainment Portal) was there when Boy and Kris was aired for the first time from Studio 9 of ABS-CBN yesterday, July 2. Watching Boy and Kris banter with each other on and off-camera is like listening to a private conversation on a grand scale.They joke and try to outdo each other, seemingly oblivious to the number of people who are listening. In fact, right before the start of the program, they compare notes on the brands of milk, rice, and water that they use in their respective households.

The set of Boy and Kris is designed like a colorful nursery, with balloons and flowers filling up practically the entire Studio. Director GB Sampedro double-checks the lights and camera positions one last time before they start airing the pilot episode live.

When it comes to technical matters, the 36-year old former host of The Buzz displays a meticulous need to get the best lighting and camera angle for her. Kris can tell (and she will tell!) when a camera angle is unflattering for her, which explains why she always looks her best on TV.

Boy Abunda, for his part, manages to keep up with the vivacious and lively pace set by Kris during the interviews. Any other host would probably fade into the background when paired with Kris.

The guests for the July 2 episode were chosen to fit the theme "Si Papa, Si Mama, & Ako." They were Edu and Luis Manzano; Mommy Carol and Judy Ann Santos; and former Mutya ng Pasig Frances Reyes and her daughter Ara Mina (whose real name is Hazel Reyes).

As a surprise to Luis, TV host Mariel Rodriguez dropped by Studio 9 just in time to witness Boy and Kris unveil the naked baby picture of the MYX VJ. Upon seeing this, she reacted, "Wow! What a turn-on!"

The close friendship between Boy and Kris becomes very apparent on this new show and viewers can expect to see more facets of their personality shine through in this one-hour show that airs Monday to Friday on ABS-CBN.