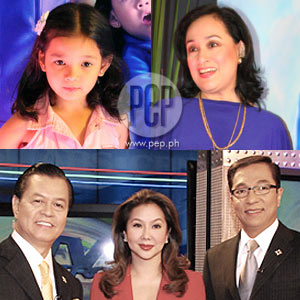 "ABS-CBN Corporation, the country's largest multimedia conglomerate, continues to be the number one TV station in June with an average national audience share of 37% or five points higher than GMA's 32%, according to recent data from Kantar Media.

"ABS-CBN continues to dominate the homes of Filipinos in Luzon, the Visayas, and Mindanao in the viewer-rich primetime block (6 PM to 12MN), where advertisers invest 75% of their TV ad spending, with a national audience share of 44% or 15 points higher than GMA's 29%.

"The Kapamilya Network's primetime teleserye Mara Clara, which Filipinos followed religiously through the months until its intense finale last month, topped the list of most watched regular programs for June with an average rating of 38.6%

"100 Days to Heaven, currently the top running weekday program, captivated audiences with its storyline and superb acting performances with 34%. This was followed by weekend top-rater Maalaala Mo Kaya with 30.8%

"TV Patrol, on the other hand, is still the undisputed number one newscast in the country with an average TV rating of 27.5% or nine points higher than GMA-7's 24 Oras (18.7%).

"ABS-CBN's airing of the NBA Finals between the Miami Heat and the Dallas Mavericks garnered a record-high average national TV rating of 19.1%, considered to be very strong for a morning block airing. By airing on ABS-CBN, the NBA finals reached more Filipino viewers and enjoyed its strongest TV ratings performance in recent years.

"In Balance Luzon (areas in Luzon outside Mega Manila), ABS-CBN enjoyed a whopping 19-point lead with 48% audience share vs GMA's 29% in primetime.

"In the Visayas, ABS-CBN primtime pulled away with a 65% audience share vs GMA-7's 17% while in Mindanao, ABS-CBN's audience share averaged 62% vs GMA's 15%. The Visayas and Mindanao are certified Kapamilya territories as their top 35 most watched regular programs are all ABS-CBN programs.

"ABS-CBN registered a consolidated net income of P976 million in the first three months of 2011, while GMA Network reported a P534 million net income in the same period.