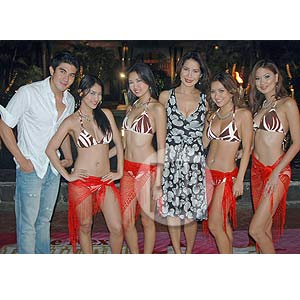 Who will ride the legendary white horse next?

Banking on the popularity of reality TV contests, makers of the White Castle Whisky have embarked on a nationwide search for the girl who will adorn Distilleria Limtuaco's 2008 campaign by wearing a red bikini while riding the brand's trademark white horse.

"Hinahanap naming talaga is somebody who really has the drive to succeed, somebody who really wants to do well, and somebody who will really do a good job at promoting our product. 'Yong babaeng iyon na pipiliin namin should really be the best endorser for the brand," said Limpe-aw during the press conference for the White Castle Search at 9501 Restaurant, ABS-CBN compound, last July 2.

This will be the first time for Distilleria Limtuaco to choose their White Castle girl through a reality show—all endorsers in the past were handpicked by the company.

Limpe-aw explained, "We decided to do a search, open it up to all women who will qualify under certain qualifications, and we do a screening from Manila to Mindanao. It is really to give every woman that chance to fulfill her dream—to be the princess that will have success and stardom."

THE SEARCH. Filipinas from Luzon, Visayas, Mindanao, and Metro Manila were chosen from hundreds of contestants as they underwent a series of special challenges to test their skill and confidence for three weeks.

During the press conference, eleven finalists—one of the 12 had backed out due to personal reasons—were presented to the media. These challenges were held in Boracay, Cagayan River, and Zambales. The three hosts for the regions were Archie Alemania (Luzon), Will Devaughn (Visayas), and Kian Kazemi (Mindanao). In Metro Manila, Luis Manzano hosted the challenges that will also be shown in one of the episodes of the reality show.

The lucky horse rider to win will receive a house and lot, a talent contract not only from Distilleria Limtuaco but also from ABS-CBN, a trip for two in Boracay, a one-year supply of salon services, and gift certificates from their clothing sponsor.

FORMER WHITE CASTLE GIRLS. Some of the former White Castle girls were chosen to judge the 11 finalists. Three of these judges, Peachy, Lyka and Maria Isabel, recalled that they were asked if they knew how to ride a horse—one of the trademarks of the advertisements.

Peachy, who endorsed the brand in 1978, narrated that she was given an offer when she was still the reigning Mutya ng Pilipinas. She recalled, "They asked me if I could ride a horse. I said, ‘Yes' but I really couldn't. So I had to learn how to ride a horse through Bobby Aguirre's horse. But it was a great experience; I never really wear a two-piece since my father is very conservative."

The 1984 White Castle Girl Lyka also remembered how tough it was to learn how to ride a horse. She said, "They asked me if I know how to ride a horse. And I said actually I did not know how. I had to learn in two weeks in Da Rosa riding school. I remember during my shooting nagkapasa-pasa ako at nagka-sunburn ako.

"It was a good experience. Actually, after the commercial came out, I believe I became more popular because, you know, I was out on almost all channels, 'no?"

Meanwhile, Maria Isabel was very proud to be one of the endorsers of the brand during her time. She explained, "It was such a great experience and I am honored to be a White Castle girl because, I was telling the other ladies here, during our time there we had no reality search, we were handpicked. And what were the criteria for handpicking us? We were the hottest girls at that time!"

The former beauty queen also said that being part of this team could give opportunities to the chosen girl. She explained, "If you notice, the White Castle girls, they were meant to stay. It doesn't mean that when you are a White Castle girl now after your reign it's over, no! Doors of opportunities are opened."

SYMBOLISMS. Stories of horsemanship such as these prompt the media to ask if it really is a requirement for the brand endorser.

Limpe-aw explained, "The concept of the model is really my dad's concept. During his time—it was a dream, it was a vision—he dreamt that he saw this girl in a red bikini riding a horse with a castle background.

The Search for the Next White Castle Girl kicks off this Saturday, July 7, at 11 p.m. The competition will be shown every Saturday of July (July 14 and 21) also at 11 p.m.