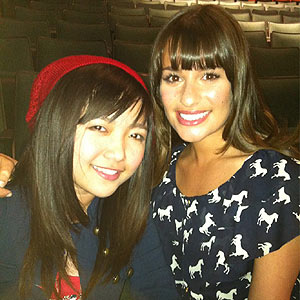 Last March 9, Lea Michelle posted the photo above as her way of welcoming Charice back to Glee. An article published in the August 23, 2011 issue of the New York Post, however, indicates that Charice's scenes in Glee Season 2 were "dramatically cut." The publication cited an unnamed source who claims, "Lea [Michele] is the big star, and producers want to keep her happy."

When Charice confirmed that she would be part of Glee Season 2, Filipinos took pride in her being chosen to be part of the American musical comedy series.

She portrayed a Filipino foreign exchange student who had a singing showdown with queen bee Rachel Berry (played by Lea Michele). In fact, the duet of Charice and Lea for "Telephone" peaked at the No. 2 on iTunes.

Since then, Charice's name became synonymous with her Glee character named Sunshine Corazon.

In her February 8 interview with HollywoodLife.com during the Woman's Day Red Dress Awards, Charice was quoted as saying: "I'm on for four more episodes, which is exciting."

"People think my role is kind of a nerdy one, so I think it would be fun for Sunshine to do something to transform herself and do like Beyoncé's 'Crazy In Love.' Like a diva, and come out and be like, Wow!"

However, Charice ended up appearing in only two more episodes. She performed "All By Myself" in Episode 17 and she sang the original song "As Long As You're There" in the season finale.

Here is the complete text of the article published on August 23, 2011 (Page 6) of the New York Post:

"There might be room for only one big-voiced diva on Fox's hit 'Glee'. Singing sensationCharice Pempengco's scenes in the last season were dramatically cut, with sources telling us it was to avoid upsetting the show's star Lea Michele.

"Charice was cast as Sunshine Corazon, an exchange student who competes against lead character Rachel Berry (Michele). But after they recorded their knockout version of the Lady Gaga and Beyoncé hit 'Telephone' for the season opener, Charice's scenes were cut.

"A show source told us: 'Charice was signed for a minimum of five episodes and did a press junket with [fellow new star] Chord Overstreet. She had a big debut, but things changed and they didn't put her back in. The word is, Lea is the big star, and producers want to keep her happy'.

"Creator Ryan Murphy introduced Charice with fanfare, saying, 'When that girl opens her mouth, angels fly out'. He also said later, 'She's coming back for five episodes at the end of the year. Lots of big, big, big ballads for Charice'. But she only reappeared in the two final episodes of the season in a much reduced role, and 'was made to look much less adorable', said a source.

"Despite a rumored rivalry, Michele praised Charice. She recently said, 'She's definitely the tiniest ball of talent I've ever seen in my life. Charice is beyond talented!'

"A 'Glee' spokesman said, 'This is categorically untrue. We love Charice, and she was a wonderful addition to Glee last season. While it is true that she appeared in fewer episodes last year than we originally anticipated, this was due to her busy schedule and the natural creative process in which some story arcs ... did not materialize as planned. Lea is a consummate pro who couldn't be more welcoming of other powerhouse singers on the show, from Kristin Chenoweth to Idina Menzel, who is set to reprise her role as Rachel's birth mom this fall.'"