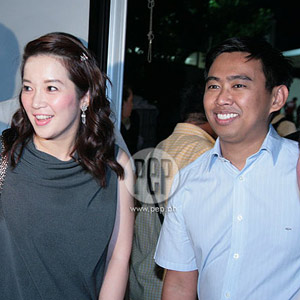 The August 26 episode of Kris TV centered on Makati City Mayor Junjun Binay who is said to be romantically linked to Kris Aquino. However, by the end of the episode, the talk show host asked people to stop linking her to the politician.

Mayor Junjun gave Kris and her TV crew a tour of Makati City Hall. He showed viewers the Command and Control Center area or known as C3.

From the C3 area, he then brought them to the Mayor's Office. When asked to describe a typical day, the mayor narrated: "At 6 in the morning gising na ako and I take my kids to school. Ganoon ang ginagawa noon pa so kahit naging mayor na ako, ipinagpatuloy ko pa rin para sa mga anak ko."

Apart from bringing his kids to school everyday, Mayor Junjun makes it a point to hear mass daily. He disclosed "Ever since my wife died, tuloy-tuloy na yon..."

The son of Jejomar Binay was married to Kennely Ann (nicknamed Ken) who died in 2009 after giving birth to their daughter.

By 8:15am, the mayor makes his rounds. "Maglalakad na kami. Pupunta sa barangay. Magra-rounds ka, mag-iinspeksyon ...tapos breakfast. Mga 10:00 -10:30 nasa office. I'll be here until lunch. It's either I take it here or have lunch at home. Tapos, I have to take my siesta...I sleep late and get up early...Hanggang dito ako [office] 6 or 7pm. Tapos dinner with my children....Tapos, umiikot ako hanggang mga 11:30pm."

Mayor Junjun said with a smile, "It's your frankness, di ba? What you see is what you get. You've been loved by the public because you are very honest."

Kris admits that rumors linking them together have been going around for more than a year now.

How does he discipline his children?

Mayor Junjun proudly showed Kris the University of Makati. The track oval of the university is sometimes used by the Philippine Azkals team for training.

He was also asked how he kept his wife's memory alive for his kids.

"We always pray for her every night. Part of our prayer is to pray for their mother, my wife. Hinding-hindi namin siya malilimutan. Siya ang kasama ko na nagbuo ng pamilya ko."

When was the last time he cried?

This time, Kris prodded him to give advice to all the male televiewers.

The politician recalled, "During that time then, I was so focused with my work, with my career, na-neglect ko yung time ko being with my wife, with my family. Karamihan sa mga lalaki, tinitipid nila ang mga asawa nila. It's a realization that life is really short. You can enjoy with your wife ways within your means...Hindi mo alam kung kailan darating ang panahon na mawawala ang isa't isa."

He also admitted that one thing he lacked the most is time.

Mayor Junjun and his wife had plans of going to Europe after she gave birth but it didn't happen.

He narrated: "Ken passed away. Di ko na nagawa. Nung nag-aagaw buhay na siya, and sinasabi ng mga doctors na she it doesn't look well for my wife, sabi ko, ' Lord, give me a chance, I haven't done this for my wife.' You know spending time with her, just the two of us enjoying our company, di na namin nagawa ulit."