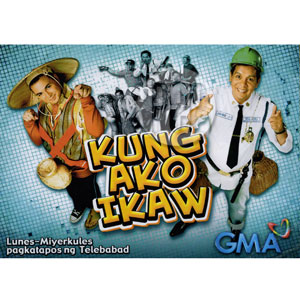 Kung Ako Ikaw is a comedy program mixed with reality, which replaces three sitcoms of GMA Kili TV during Monday to Wednesday—Who's Your Daddy, Bahav Mo Ba 'To,? and Nuts Entertainment Just 4 Play. While the first two shows were suddenly stopped from airing, which is just temporary according to GMA-7 program manager Bang Arespacochaga, Nuts Entertainment Just 4 Play will take the slot of HP: Highest Level Na on Saturdays.

However, despite the impermanent shut down of Bahay Mo Ba 'To? and Who's Your Daddy?, Keempee de Leon and Joey Marquez—who were main cast members of the two shows, respectively—will reprise their character roles, namely Harold and Tsong.

Each week, starting on Monday, July 16, Kung Ako Ikaw will feature three celebrities who will be tasked to do menial jobs and referred to as "Manggagawa." They will do a themed job under one supervisor who will be called "Bisor." The "Bisor" is the expert on the particular job featured per week and will be the one to set the criteria for rating the "Manggagawa."

The "Bisor" will decide who will be the winner based on the performance of the celebrity. The audience will also take part in deciding who among the celebrities performed best. The audience may start voting for their bet on Monday night up to Wednesday night, when the winning "Manggagawa" will be announced in a live episode.

COMEDY-REALITY. Since GMA-7 claimed that Kung Ako Ikaw is the first comedy-reality show in the Philippines, entertainment press asked how is it different from QTV-11's Day-Off and the defunct reality show Extra Challenge.

And how are they going to inject humor in this show?

END OF SITCOMS? After GMA-7's sudden change of programming was aanounced, some members of the press had speculations that GMA-7's Kili TV shows were not rating.

"When we decided to launch madami na kaming nakabangko. But, actually, we don't wanna end it kasi it can come back anytime. So we're still looking forward to that now."

Meanwhile, GMA-7 vice president for entertainment TV Marivin Arayata assured that their talents from the three shows that have been replaced will still have projects in the Kapuso network.

Continue reading below ↓
Bong Revilla will be having a new show by August, Rufa Mae will join the jurors in Showbiz Central, while Ronaldo Valdez will have a soap opera. Tessie Tomas, on the other hand, is still in Europe, according to Keempee.
Read Next
Read More Stories About
Keempee de Leon, Joey Marquez, GMA-7, television
Post a Comment
Featured
Latest Stories
Trending in Summit Media Network