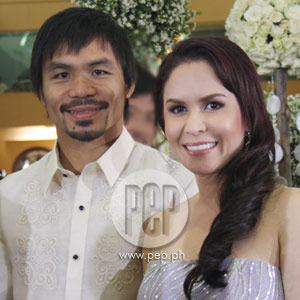 Anggulo, TV5's newest public affairs program, aims to give viewers a closer look at the lives of celebrities and newsmakers. The pilot episode aired last night, September 7, tackled the multi-faceted life of Jinkee Jamora-Pacquiao as a wife, mother, and businesswoman.

Anchored by veteran broadcast journalist NEWS5 chief Luchi Cruz-Valdez and her team of senior reporters, Anggulo shared with its viewers the two mansions of the Pacquiaos in General Santos City and their current house in Laguna.

HOUSE IN FORBES PARK. For now, the Pacquiaos are comfortable living in their Laguna residence. Inside their home, not a shred of Manny Pacquiao's boxing paraphernalia can be found.

Manny's wife agreed to accompany correspondent Jove Francisco as he toured their houses in General Santos City. Jinkee said that the first mansion contains a lot of her husband's boxing paraphernalia. She also bared their plan to renovate the mansion to make it more modern looking. They then headed to "Mansion 2" that already has very modern interiors.

The latest purchase of the Pacquiaos is a P388 million house with a 1,500 square meter lot located in Forbes Park, Makati City. According to Jinkee, the minute she set eyes on the house, she liked it at once.

JINKEE AS A HOMEMAKER. In college, Jinkee took up a business management course but unfortunately, she was unable to finish her degree. She opted to work instead to help her family. Back then, she was a beauty consultant at a mall in GenSan.

This mall is the very same place where she met the man who later became her husband. Reynaldo Jamora, Jinkee's uncle, was an assistant to Manny who was then just starting his boxing career. Reynaldo introduced her to Manny, who was smitten by Jinkee's beauty and personality. Manny even broke off his engagement with his fiancée back then and pursued Jinkee. To date, Manny and Jinkee have been married for 11 years.

Jinkee and Manny had a civil wedding in May 2000 and their church wedding took place a year later. Their union has produced four children: Emmanuel Jr. (nicknamed Jimuel), Michael, Princess and Queen Elizabeth.

Manny is considered the only boxer in the world to earn eight world boxing titles in as many weight divisions.

In politics, he currently serves as Sarangani representative in the 15th Congress of the Philippines.

Jinkee highly values her family and becomes teary-eyed when she talks about them. She explains, "At the end of the day, pamilya mo pa rin ang kasama mo. Kahit anong mangyari sa buhay mo, sila yung malalapitan mo. Kumbaga, wala nang iba. Although you have friends, you have everything. Pero hindi sa material na bagay may pera ka..."

LUXURY BAGS. Jinkee admits she has a "girly" side and fancies bags. She has a huge collection of designer bags including her favorite Hermès brand. Jinkee has about 16 of these luxury items. When asked about the cost, she simply said, "Hindi naman umabot ng P2 million sa bag. Mga P1.2 million lang."

BEING AN ENDORSER. From being a simple "probinsiyana" wife to Manny Pacquiao, Jinkee can now be considered a celebrity in her own right.

She even has a number of endorsements of her own, and is seen on billboards and TV commercials.

Correspondent Ina Zara caught up with "Mrs. Pacman" at her photo shoot for Belo Clinic. Dolled up and wearing a figure-hugging ensemble, Jinkee exudes a sophisticated charm and quiet confidence.

Jinkee describes herself as "mahiyain." When asked how she presents herself as a congressman's wife, she said with a smile, "Dapat 'hot mama' pero hindi ako sobrang revealing. I'm just being myself."

Manny himself made a visit to the photo shoot location to show his support for his wife's personal endorsements. The "pound per pound" Boxing King proudly said, "Laging maganda ang asawa ko since before pa." According to the report, Jinkee earned P1.2 million from the photo shoot alone.

HUMBLE BEGINNINGS. Jinkee spent her growing-up years in Saranggani province together with her parents and siblings. They led a simple life back then. Jinkee's mother points out, "Hindi naman po talaga mahirap...Nakapag-aral sila [her children] sa private school."

Janet, Jinkee's identical twin sister who is camera-shy, agreed to be interviewed for the TV5 late-night show. When asked about the differences between her and Jinkee, Janet admitted, "Sa ugali naman, ako ang mas pranka at mahiyain siya [Jinkee].

Janet said that it is Jinkee who provides for their needs. She said, "Lahat ng mga pangangailangan namin, ibinibigay niya."

BEING A BUSINESSWOMAN. Jinkee was put in charge of all the businesses in the Pacquiao "empire." She told correspondent Roices Naguit-Sibal that their first business venture was the Pacman convenience store put up at GenSan. It became successful and led to the establishment of eleven more branches within the city.

Every time she is at GenSan, she makes it a point to check each business venture.

Apart from businesses in GenSan, the Pacquiaos have business ventures in Manila such as Pacquiao shops that sell athletic gear, sportswear and trinkets.

One of their biggest investments is the 8-storey MP Tower located in Sampaloc, Manila. The building houses the other businesses of the family.

ON RUMORS OF INFIDELITY. Since she is married to a high-profile boxer-politician, Jinkee has had to deal with a lot of controversies. Through time, she has learned to toughen up and put on a brave front.

When asked to comment on rumors about her husband's infidelity and siring a child outside marriage, Jinkee takes these issues with a grain of salt.

Does she have any plans of running for public office?