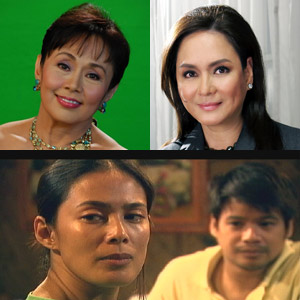 One of the highlights of the documentary featured Batangas Governor Vilma Santos-Recto having a chat with the face behind MMK, ABS-CBN President Charo Santos-Concio.

What are your guidelines in choosing a story fit for MMK?

"Ang number one na batayan, siyempre yung katotohanan. That's the unique selling point of Maalaala Mo Kaya that we are dramatizing real life stories... We don't only mirror life; we mirror everything that is Filipino. Ano ang mga katangian ng isang Plipino bilang isang tao? Our love for God and family.Yung resilience natin at courage. Yung instinct for survival...yung pagkamasayahin natin. We're a happy people. We are hopeful. We are aspirational. These are the qualities and the traits of the Filipino at sinasalamin yon ng MMK."

What were the problems faced by MMK in the past?

"In the past, our ratings were also challenged. That was a sad chapter in the history of MMK. Masakit matalo. They were highly competitive years. We carried on. We will not give up. We will continue to share these true-to-life stories with our audience..."

Governor Vi asked the TV host-executive "How does a Charo Santos cry? Are you a strong person?"

"I'd like to think I am a strong woman. I have inner strength. I've matured emotionally. Bihira na akong umiiyak. I just wait for the right time and I speak out my thoughts. I don't feel guilty speaking out my thoughts. You have to be comfortable who you are...You choose your battles."

You were quoted saying, 'Through MMK, I learn how to kill myself everyday.' What does this mean?

"When you are young at maliit ang mundo mo, you become too self-absorbed. It's all about 'I, Me, Myself.' It's all about you. You whine about your problems. Yung MMK, I started reading the letters, yung paghanga ko talaga sa pagdala ng problema ng letter senders na ito, na yung problemo ko sa kontexto ng buong mundo, ay napakaliit. It's a speck of dust. Pag nanonood ako ng MMK, and I'm this resonates with a lot of the viewers, it gives you catharsis."

What do you think is MMK's main contribution to the Filipino people?

"When you watch MMK, and you see the qualities of the Filipino, the stories that are featured there, we're a great people."

What are MMK's plans in the future?

"Madami pang kwento. One thing I'm very proud of personally is that MMK has been a home to our directors now, our writers and even actors. Parang workshop na rin siya. It's alright for these young people to make these in my show."

If you were to make a Charo Santos story, what would you call it?

"How do you handle your position in Philippine media?"

"With a lot of patience. And with a lot of grounding. If there are problems, it's not about me, I don't feel aggravated. It's about a person going through something. What are the concerns? Let's deal with it. Let's look for the solution. Hindi ka pwedeng makain ng lahat. Kailangan kalmado. May inner strength."

To cap the month-long celebration of its 20th year anniversary, MMK will feature five stories that

On October 1, the episode titled "Palawan" will feature a mother who fights for mining to be stopped in Palawan. It features the talents of Angel Aquino, Maria Isabel Lopez, Miles Ocampo, Yul Servo and Paul Salas. This episode is directed by Cannes award-winning director Brillante Mendoza. Angel plays the role of Bogs, a principled mother who gives her all to stop mining in Palawan. But in the middle of her quest, she will face the challenge of blindness and bringing her family back together.

The episode titled "Bukidnon Happy Feet" showcases the story of tap dancing brothers who competed in Pilipinas Got Talent Season 2. It narrates the struggle that brothers Ramon and Bambi had to go through just to reach their dream of getting their family out of poverty. Written by Joan Habana and directed by Dado Lumibao, this episode features John Prats and Nash Aguas as the dancing brothers and Ariel Rivera as their father. Its airing date is on October 8.

A gay person's life will be the centerpoint in MMK's"Barcelona" episode slated on October 15. Jake Cuenca portrays a gay character named Louie. He strives to do his best to please his father in order to be accepted. Also joining the cast are Ricky Davao, Vivian Velez and veteran actress Malou De Guzman.