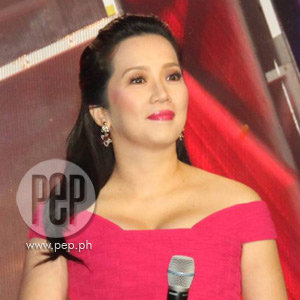 "What makes this appointment a big honor is that it's not just in the Philippines. Ako po ang magiging representative ng Asia. Ang American representative is Angelina Jolie," says Kris Aquino (in photo) about being a goodwill ambassador for the United Nations High Commissioner for Refugees.

Kris Aquino is being eyed to be the Asian counterpart of Angelina Jolie as goodwill ambassador for the United Nations High Commissioner for Refugees.

According to its official website, the United Nations High Commissioner for Refugees (UNHCR) is an agency that currently assists 20 million refugees in approximately 120 countries.

Chosen Goodwill Ambassadors are celebrities that are "the public face of the UN refugee agency. There are not many of them, but they help bring UNHCR to every corner of the world through their celebrity, popularity, influence and hard work."

In the October 11 episode of Kris TV aired earlier today, President Benigno Aquino III's sister talked about this appointment, which she has been keeping under wraps for several days already.

"But I don't have the papers yet. Magmi-meeting kami next week with the United Nations representative. What makes this appointment a big honor is that it's not just in the Philippines. Ako po ang magiging representative ng Asia. Ang American representative is Angelina Jolie," Kris paused as the audience gave her a round of applause.


Presidential political adviser Ronald Llamas revealed that the invitation for Kris to be an ambassador came from UNCHR chief António Guterres.

In an article published yesterday on GMA News TV, Mr. Llamas was quoted as saying: "They invited Kris to become Ambassadress of Goodwill in Asia in the tradition of Angelina Jolie and Princess Diana."

Mr. Llamas, who recently arrived from the UNHCR meeting in Geneva, Switzerland, mentioned that the Philippines is the only Asian country member of the UNHCR executive committee.