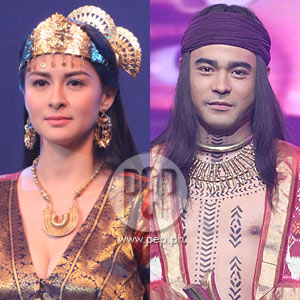 "GMA Network's groundbreaking epic series, Amaya, continues to win the hearts of television audiences, which has translated to the program's phenomenal ratings success on the weeknight primetime race.

"In viewer-rich Mega Manila, which makes up 58 percent of total television households nationwide, Amaya scored an average household share of 35.9 percent versus its ABS-CBN counterpart's 27.3 percent. It likewise toppled its competition in Urban Luzon with household share points of 35.4 versus ABS-CBN's 27.9.


"The historical fiction epicserye definitely got everyone hooked on GMA Telebabad with more revelations, conflicts and plot twists to be revealed as Amaya enters its second book with new characters to spice up the exploits of the warrior princess heroine.


"Witness how these new foes and friends alter the life of Amaya as her quest to save her people and bring justice to her land continues in the high-rating epicserye. Find out how Amaya will transform into a fearless warrior and fulfill the prophecy to become the most powerful woman of her time.


"Viewers of Amaya will have even more reason to stay glued on their favorite primetime soap as GMA Network announces the extension of the pioneering epic series. The 11-week extension came after the successive victory of Amaya over its rival program since it premiered last May 31.