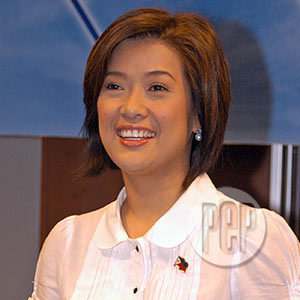 Bernadette Sembrano, the host of Nagmamahal, Kapamilya, says that she is still being associated with her former GMA-7 program, Wish Ko Lang. Her Kapamilya show celebrates its first anniversary with a month-long celebration starting August 4.

"If they say that we're a copycat, then let us be copycat, I don't mind," said Bernadette Sembrano, host of Nagmamahal, Kapamilya, when asked for her opinion about the comparison between her program and GMA-7's Wish Ko Lang.

The TV newscaster-host even added, "I think it's a big thing to say that goodness lies in one station, I mean, goodness would be within each one of us, and lahat tayo mayroon tayong responsibilidad to do good."

Bernadette also admitted during the media junket for the anniversary of Nagmamahal, Kapamilya last July 18 in ABS-CBN compound that she is still being associated with her former program.

Bernadette was the first host of GMA-7 show Wish Ko Lang when it premiered in August 2003. Bernadette was replaced by Vicky Morales when the former transferred to the Kapamilya Network.

Bernadette, or Ate B to avid viewers of Nagmamahal, Kapamilya, is very grateful that her show has reached one year in television. "Sobrang grateful kasi umabot ng isang taon. And siguro kahit sandali lang, it may have been one month, ngayon I'm just grateful na umabot ng isang taon. Pero ang bottomline is we are part of doing something good. It's just awesome to be part of doing something good na pinag-uugnay ang mga Pilipino all over the world."

Nagmamahal, Kapamilya started airing in April 2006. Its main goal was to reunite overseas Filipino workers with their families, which they have left here in the country.

At first, the inspirational lives of global Pinoys were told through dramatization and storytelling. Then, in November 2006, the program reformatted by using real documentary footage to show the actual journey and emotions of reunited families. To date, the show has featured 13 real-life success stories and succeeded in reuniting 17 families.

Bernadette also confessed that there were instances that she got attached to the life story of the subject. However, she has learned how to cope with it. "Naa-attach ka pero, ako naman, alam ko naman na you can't save the world. You can only give your best, give your best doon sa subject. Kumbaga hindi mo naman pwedeng i-solve ang lahat ng problema sa mundo, at least do your part."

ANNIVERSARY SPECIAL. As a treat for their avid viewers, Nagmamahal, Kapamilya will be having a month-long celebration. It will feature exceptional stories of celebrities starting August 4.

The show will have an exclusive interview with controversial Superstar Nora Aunor and will feature the serendipitous love story of Marianie de Villa, as well as the life story of Pinoy Big Brother Season 2 Big Winner Beatriz Saw.

There will be a Nagmamahal, Kapamilya Day on DZMM on August 26 wherein Bernadette will host an hour-long radio special on live broadcast via DZMM Teleradyo. It will give give a chance to selected people to get in touch with their loved ones abroad through free overseas calls.

Aside from reuniting families, Nagmamahal, Kapamilya,together with Globe Asiatique, will fulfill another Filipino dream through its promo "Magpabahay ng Kapamilya." One lucky Kapamilya, which will be announced late August, will be given a house and lot.